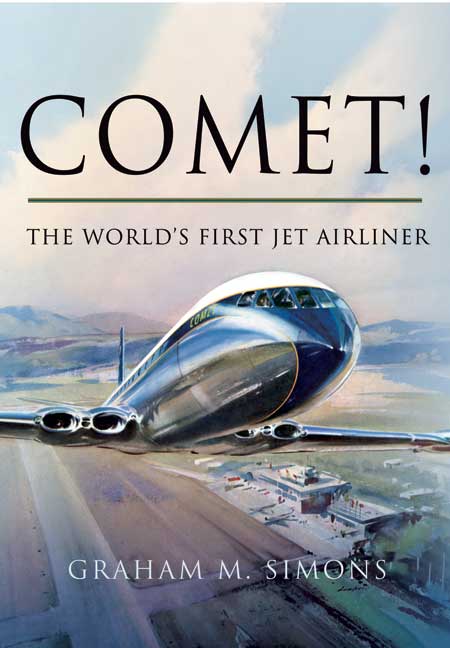 Add to Basket
You'll be £25.00 closer to your next £10.00 credit when you purchase Comet! The World's First Jet Airliner. What's this?
+£4 UK Delivery or free UK delivery if order is over £30
(click here for international delivery rates)

This new volume from the respected and well-regarded aviation historian and author Graham M. Simons is sure to appeal to all aviation enthusiasts, including as it does a wide array of historical sources and archival information drawn together into one consolidated and definitive volume.

Extensively illustrated throughout, the book features details lifted directly from enquiry and salvage reports. It offers a unique insight into the failures and tragedies that blighted the early days of the Comet's development, laying down lessons that were ultimately to benefit later designs. As part of his research into the book, the author interviewed John Cunningham, the Comet test pilot who was the first to experience flight at the helm of this iconic craft. He was also given access to materials belonging to Harry Povey, the DeHavilland Production Manager. Insights gained from these two sources add a deep level of authenticity to the narrative and a more personalised account of the proceedings.

Attention is also paid to the derivative Nimrod design, and the book includes details drawn from an interview conducted with the aircraft commander of the last ever Nimrod operational flight. Interviews of this kind are supplemented by the author’s own narrative, setting personal experience within historical context and exploring the themes and topics that the interviews evoke.

Simons' work is a masterpiece of the most diligent research and extraordinary detail and surely represents the definitive study of the Comet, right from the first meeting of the Brabazon Committee in 1942 up to the debacle and scrapping of Nimrod in 2010.
This is a terrific book. Very strongly recommended.

A solid book of such scope that you'll probably consult it for a lot more than just Comet material.

The author has researched diligently, written in a convincing and entertaining manner, and the work has been lavishly illustrated throughout with drawings, sketches and photograph. This is an outstanding account of the life of the Comet. British readers will be saddened by the story because of its outcome, but all readers will find inspiration and achievement in the tale.