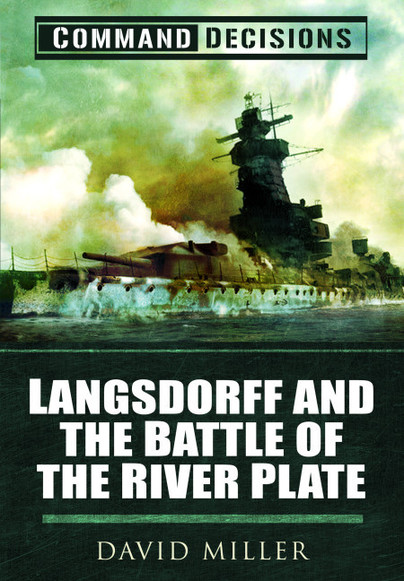 Command Decisions: Langsdorff and the Battle of the River Plate (Paperback)

Add to Basket
Add to Wishlist
You'll be £12.99 closer to your next £10.00 credit when you purchase Command Decisions: Langsdorff and the Battle of the River Plate. What's this?
+£4.50 UK Delivery or free UK delivery if order is over £35
(click here for international delivery rates)

This compelling new study of the Battle of the River Plate concentrates on Kapitn zur See Hans Langsdorff, the commander of the German pocket battleship Graf Spee it is written from his point of view. The story of his mission at the start of the Second World War to prey on merchant shipping is graphically retold, and Langsdorffs command decisions are the primary focus of David Miller's gripping narrative. He considers in vivid detail the factors Langsdorff had to consider as he assessed the situation of his ship and choose his course of action. He describes the intelligence Langsdorff received and his knowledge of the position and strength of the forces of the Royal Navy that were arrayed against him. Langsdorff's interpretation of his mission and the tense calculations he had to make in order to carry it out are the essential elements of this dramatic story. Langsdorff, operating alone and thousands of miles away from home and with no prospect of support, had to grapple with the enormous burden of a lone command. He made grave mistakes, and these are ruthlessly exposed. But this fascinating re-examination of his actions and his leadership does nothing to diminish his reputation as a brave and honourable officer.

Langsdorff and the Battle of the River Plate is a stirring tale of maritime conflict in an era which was about to change into a brutal submarine war. The story is expertly told and highly recommended.