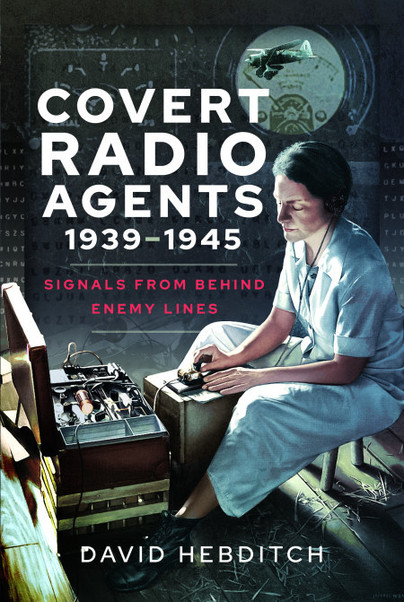 Useful narrative about these fearless individuals who put their lives at risk to operate behind enemy lines. Such was the nature of their work that one time, life expectancy for these brave men and women was just six weeks.

There are some good case histories here, and the detail about equipment and the manner of operations are included in the Technical Briefings chapter. Read this book and be thankful for the service of these covert radio agents; thankful too that we are not called upon to make such sacrifices.

This book was really enjoyable and informative, I learned so much from it. Right from the beginning, these men and women are like the forgotten few and they had such a dramatic and vital role in how the future of the war played out. The bravery needed was immense, it was such a cloak and dagger operation for each person put behind the lines. Also to think that the life expectancy of radio operators was about 6 weeks, really shows how dangerous things used to be for them. The book is well written in that it very much informed the reader, but it was easy to read in layman’s terms. Sometimes these types of books can be complex, complicated and detailed but this book was easy to read and understand. I would certainly recommend this book to others who enjoy the spying and communications game. I must admit I used some of the information I learned in this book to help teach the Navigator Youth group I run on a night about communications.

"...a treasure of a book, part narrative, part tutorial and throughout, an authentic adventure saga. Ultimately, it is a very human story generously seasoned with ingenuity, technology and hardy individualism."

"...oddly entertaining for a book that deals in deception, espionage, death and destruction. It’s copiously illustrated with pertinent photos, maps and diagrams gleaned from official and unofficial sources."

I thoroughly enjoyed this book - it has plenty of detail about the technical aspects of what was required for agents (during WW2) to set up and send out coded messages. Watching any film about this era makes you think that all they needed to do was open a suitcase, pull out the telescopic aerial and start tapping out the message... the reality of lugging around a 25Kg set, putting up a 20 meter wire aerial, and sending messages at an exact time, for a maximum of a couple of minutes... all the while waiting for the enemy to track you down from the signals you are sending - with a bullet in your head if found out... terrifying.
The process of encoding is detailed here - and it makes your head spin. I was aware that a book would be chosen to provide random letter choices for any day/time, but the procedure for creating groups of 5 letter groups is mind boggling - even for this cryptic crossword fan! How on earth anyone could do this while under the constant strain of discovery, or worse, getting it wrong, is truly inspirational.
The book has many actual events detailed from the time, and the impact that the signals sent had on the outcome of the war. A great read about a truly incredible and inspirational bunch of very brave people.

We just watched a very good show on women agents behind the lines during WW II so this book was a timely read. It was dangerous enough to be a common or garden spy but add in the complexities of the machinery and the difficulty in transporting it and keeping its location hidden and you have danger on steroids.

It took some courageous, resourceful and dedicated individuals to gather information, convert it into code and then send it back to the people who could make good use of it. In many cases nerves of steel does not begin to describe it. These people needed to be trained to be good agents as well as technicians. One could not call up a service repairman if something went wrong. In this area, the British were the gold standard in training and while credit is often glossed over in favour of a good book or movie, even the Americans could not have succeeded behind enemy lines without their assistance in training.

The book does a good job of telling the stories of different fronts and the people who got out reconnaissance crucial to the war effort. The conditions in which they toiled were quite different but the cost of failure was the same- a gruesome and often excruciating death. The odds of coming home safely were not great but these heroes did it anyway.

Kudos to the brave souls who did the job and kudos in telling their stories.

The amount of research that went into this book was incredible. Hebditch manages to cover the individual backstories of many agents and go into detail about the technical aspects of cryptology and radio transmission in the 40s. For anyone who enjoys historical fiction about this topic, this is a great introduction to the nonfiction side. If you’ve already read a lot on the subject, Hebditch goes beyond the areas and actors usually discussed in this subgenre. I highly recommend this book to anyone interested in learning more. It is also a great book for those who love reading books that make you want to pick up a million more books about individuals or events mentioned in passing.