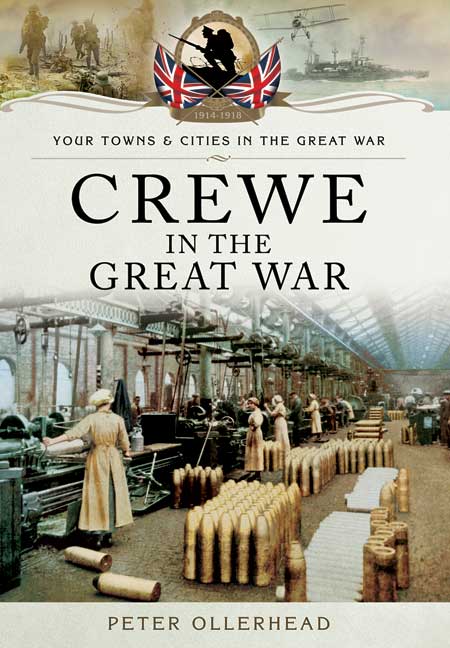 Crewe in the Great War (Kindle)

Click here for help on how to download our eBooks
Add to Basket
Add to Wishlist
You'll be £4.99 closer to your next £10.00 credit when you purchase Crewe in the Great War. What's this?
Need a currency converter? Check XE.com for live rates

Along with most of the United Kingdom the railway town of Crewe was affected in many ways during the four years of the Great War. The struggle brokered conflict and co-operation in this industrial community planted in the rural acres of Cheshire by the Grand Junction Railway Company in 1843. A military tradition dating back to the town's earliest decades helps to explain the eager response by the young men of Crewe when war was declared in 1914.

A rapid increase in the cost of living along with accusations of blatant profiteering soon generated demands for regular wage rises. This conflict between organised labour and industrial and commercial management was more marked in Crewe than elsewhere in the region.

Other features of wartime Crewe that are covered in this book are conscription, Zeppelin scares, food shortages, rationing, regular biographical details of those that were killed, the Christmas truce of 1914, influenza epidemics and the division of opinion over a suitable war memorial. These are just some of the issues that affected Crewe during the troubled years of the Great War.

This is a scholarly yet immensely readable insight into life on the home front a century ago.

'Crewe in the Great War' by Peter Ollerhead arose from the keen local historian's interest in the history of the town, which he has been researching for the last fifty years. His book examines the ways in which the industrial community of south Cheshire coped with the numerous problems that were created by the war and includes biographical accounts of the young men of Crewe who were killed or wounded, along with dozens of photographs and illustrations.

Among the themes covered in 'Crewe in the Great War' is the frenzied response to the declaration of war along with the slow realisation that it was not going to be over by Christmas...From extracts of local soldiers' letters it can be gauged how men at the Front felt; rumours and reports of Zeppelin attacks from autobiographies of Crewe people alive at the time illustrate how local people dealt with the threat of air-raids. Always present is the cost of the war in human terms with the deaths of Crewe men in the many battles and trench warfare... The relief and joyous celebrations when the war was over are tempered with the continuing sadness of the long casualty list which caused some mothers and widows to turn to spiritualism and seances for comfort.