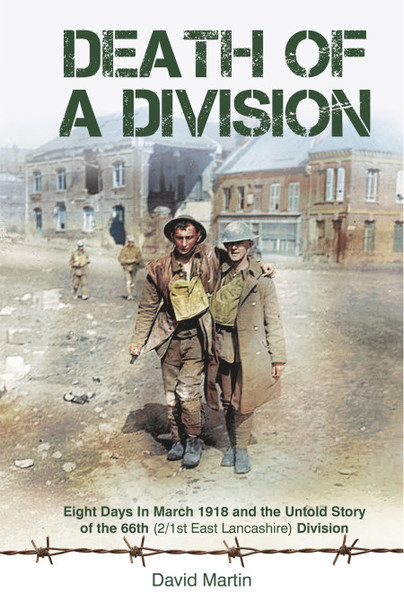 Death of a Division (Hardback)

Add to Basket
Add to Wishlist
You'll be £19.99 closer to your next £10.00 credit when you purchase Death of a Division. What's this?
+£4.50 UK Delivery or free UK delivery if order is over £35
(click here for international delivery rates)

The war had dragged on towards its fourth year. There seemed little prospect of any immediate end to the ceaseless slaughter. Field Marshal Haig saw the war as a continual battle of attrition until the Germans were finally battered into submission. In Germany the economic blockade that had been imposed upon it, enforced by the Royal Navy, was slowly strangling the country. The Kaiser and his generals knew that the longer the war dragged on the greater was the prospect of an Allied victory.

At 09.35 hours on Thursday, 21 March 1918, one million German soldiers left their trenches to attack the British Expeditionary Force along a front of nearly fifty miles. It was Germany’s last major effort to win the war, and it very nearly succeeded. Facing the onslaught from more than forty German divisions stood just a dozen British divisions. Though overwhelmed and compelled to retreat, the British fought a tenacious rear-guard action which hampered the German attack, allowing other BEF and Allied units to take up new defensive positions.

During the retreat three British divisions bore the brunt of the fighting, suffering crippling casualties. One of those was the 66th (East Lancashire) Division which lost more than 7,000 men. Effectively destroyed, the division had to be withdrawn from the line to be rebuilt. The loss of so many men had a devastating effect on the lives and economy of cotton-manufacturing towns of East Lancashire.

Illuminated with the dramatic recollections of those Lancashire lads who survived the disaster, Death of a Division is one of the most stirring stories of the First World War.

For anyone interested in the 1918 fighting, in particular the Spring offensive, or the contribution of those East Lancashire men, this book is a must buy.

Keith Poignant and horrifying story of the East Lancashire 66th Division that was more or less wiped out in the last major onslaught of the first world war.

This is a great addition to the available divisional histories and also timely to coincide with the centenary of the Spring offensive.

Article: 'Untold story' of trenches bravery told in new book as featured by

Told in 220 incredibly researched pages, the book is a must-read for both military historians, or anyone who wishes to learn more about the bravery of these Lancashire men.

Article: 'Inspiring tale of soldier's courage to hold back the 1918 German offensive' by Mark Green as featured by

Article: 'Little-known story of WWI sacrifice' by Stuart Pike as featured by

The author has compiled a very good history of the 66th Division in the Great War focussing mainly on its involvement in the final part of Third Ypres in 1917 and the German Offensive in March 1918. It contains many excellent personal accounts and the story of the impact of losses on the small factory towns in the recruiting area of the Division is well told. Overall it is a very good account of the 66th Division, a solid reference for those of us who need to dip into such sources and also for the general reader.