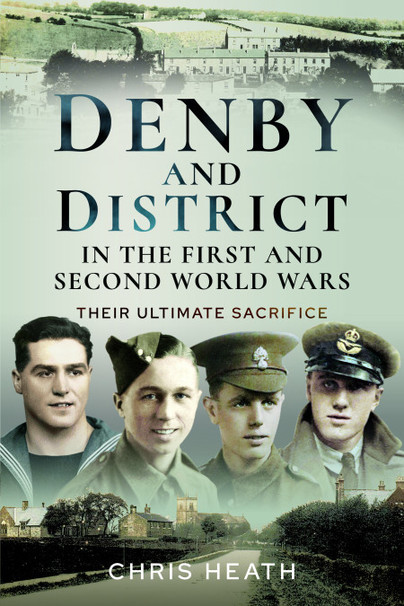 Denby & District in the First and Second World Wars (Paperback)

Add to Basket
Add to Wishlist
You'll be £13.59 closer to your next £10.00 credit when you purchase Denby & District in the First and Second World Wars. What's this?
+£4.50 UK Delivery or free UK delivery if order is over £35
(click here for international delivery rates)

Denby & District in the First and Second World Wars: Their Ultimate Sacrifice, commemorates and celebrates the lives of the soldiers from this part of the world and the role they played during hostilities. For the vast number of people, the local War Memorial is something taken for granted; it has always been there and though it is respected, it is not really understood anymore. The names upon it might be familiar to some but the lives and stories behind those names have largely been forgotten. The same is true of the local war graves in the churchyards. Interest sometimes peaks when a major anniversary occurs or a new film such as the recent ‘1917’ is released but this generally wanes after a while. This book provides a unique and timeless insight into our knowledge of the men of Denby Dale, Upper & Lower Cumberworth, Birdsedge, Upper & Lower Denby and Ingbirchworth and throws up many surprises. The soldier’s families are examined in detail, their civilian occupations, their homes and achievements. Their war service histories, where they fought, how they died and where they are buried are included where those records have survived. It is not just the fallen contained in these pages and the stories of many who returned from the arena of the two World Wars are printed here for the very first time. With 130 illustrations and 30 family trees, this book is a tribute to all those that made the ultimate sacrifice and their comrades in arms who made it home.