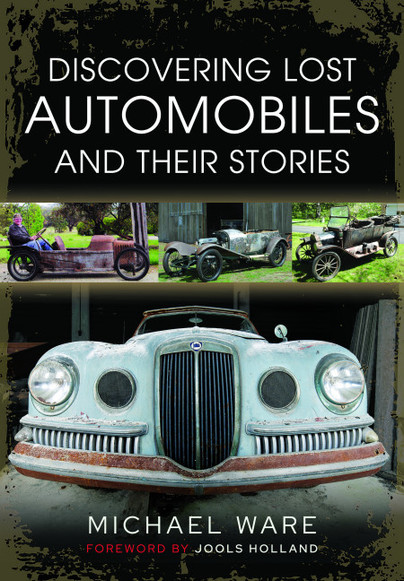 Preorder
Add to Wishlist
You'll be £19.60 closer to your next £10.00 credit when you purchase Discovering Lost Automobiles and their Stories. What's this?
+£4.50 UK Delivery or free UK delivery if order is over £35
(click here for international delivery rates)

Many enthusiasts dream of finding a Bugatti or a Bentley in a barn or a long disused building. In reality, such finds are more likely to be an Austin 7, Ford Popular or a Mini. This book is stuffed with these so called “barn finds”. The author has tried to find out the background to the abandonment and the previous history of the “as found” car when it was in regular use. Why was it put away and apparently forgotten? Many of the stories have appeared in his “Lost and Found” column in “Classic and Sports Car” magazine, but a book gives a chance for the expanded story to be told. The cars featured date from 1900 through till the 1980’s, most come from Great Britain and Europe but there are plenty from Australasia and USA. There are well over 200 different cars plus collections featured. Each story has at least one illustration to go with it. Some of the locations are bizarre, a Daimler buried under a rockery, a Porsche sunk in Lake Lucerne, a Rolls -Royce on the roof of a high rise building in Karachi, or a Morris 8 special in a Gloucestershire pond. There is a chapter on collections of cars, put together by seemingly eccentric owners who never got around to restoring them before their death. The author is not critical of any of these owners and is grateful for the number of cars they have saved from almost certain destruction.

Michael Ware became a professional motor sport photographer in 1959, before moving in 1963 to The Montagu Motor Museum at Beaulieu where he took charge of the Photographic Library. Very much to his surprise Lord Montagu offered him the job of the Museum Curator in 1966. In 1972 the museum became the National Motor Museum Trust which he managed until retirement in 2001. He started writing about “barn finds” in 1983. His other interests include Welsh narrow gauge steam railways and British canals