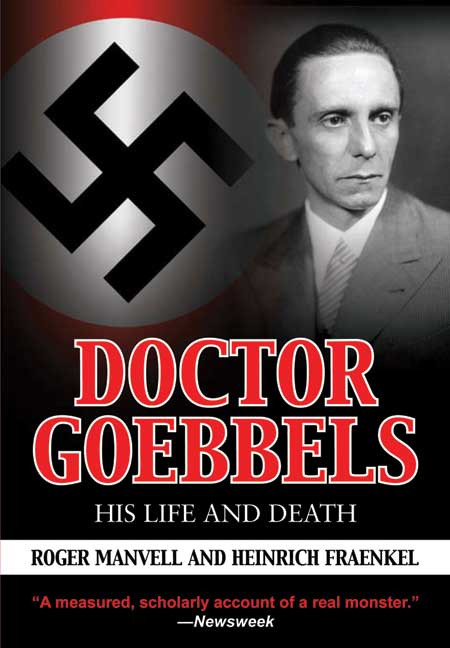 His Life and Death

Add to Basket
Add to Wishlist
You'll be £15.99 closer to your next £10.00 credit when you purchase Doctor Goebbels. What's this?
+£4.50 UK Delivery or free UK delivery if order is over £35
(click here for international delivery rates)

As a leader of the twentieth century's most evil regimes, Joseph Goebbel's legacy is his work constructing the mythic image of Adolf Hitler
during his rise to power and his catastrophic rule of Germany. In Doctor Goebbels, Roger Manvell and Heinrich Fraenkel reveal the man behind the Nazi propaganda machine, beginning with his idyllic childhood in Germany and ending in a dramatic death by suicide in the Führer-bunker in 1945.

Part biography and part horror, Manvell and Fraenkel delve deep into the mystery shrouding one of Hitler's most evil henchman. Using information from his own unpublished diary and first-hand accounts from the Nuremberg Trials, from Goebbel's sister Maria, and from the fiancé of his youth, Else, Goebbel's carefully crafted character is ripped apart to reveal a boy determined to overcome youthful disabilities
and prove his devotion and dedication to his country.

Doctor Goebbels delivers the kind of detail that only true scholarship can provide. Written with flair and polished with precision, this account is sure to leave readers shocked and surprised at the life of the Führer's 'Minister of Hate'.

The earlier part of the book is the least familiar. Here we see the development of both Goebbels' skills and techniques and his relationship with Hitler.

Once we reach the war period the authors take the refreshing attitude that the reader is familiar with the course of the conflict and are free to focus on how the events impacted on Goebbels, and how his relationship with Hitler changed over the years.

The authors were able to interview many of the key figures in Goebbels' early life, including a number of important figures in the early days of the Nazi party.

One key question is to what extent Goebbels was a monster in his own right, and not just a propagandist. The authors soon answer that question - Goebbels is shown to have been just as anti-Semitic as any of the senior Nazis, and to have played a major part in the early persecution of the Jews, while his propaganda methods played a major part in the collapse of the Weimar Republic.