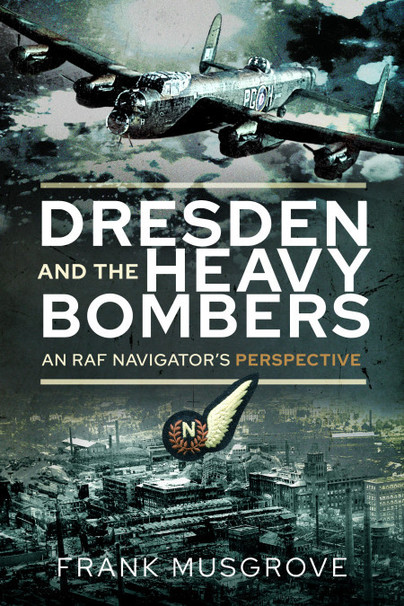 Dresden and the Heavy Bombers (Paperback)

Add to Basket
Add to Wishlist
You'll be £9.09 closer to your next £10.00 credit when you purchase Dresden and the Heavy Bombers. What's this?
+£4.50 UK Delivery or free UK delivery if order is over £35
(click here for international delivery rates)

This is the first hand account of a young man's entry into World War II in 1941, culminating in his role in the bombing of Dresden in February 1945 by RAF Bomber Command. This is not a gung-ho account of flying with Bomber Command, instead Musgrove takes the form of a basic narrative in his memoir, paying particular attention to fear, morale and, as the author explains, the myth of leadership felt by those involved first hand.

Several raids are described in detail and illustrate the variety of experiences, problems and dangers involved in such hazardous warfare. First published nearly 60 years after his experiences, Musgrove delves in to his recollections of the bombing of factories and cities to reflect on the grave moral issues brought on by this particular raid.

What really stands out in this memoir is the author’s writing style and his use of vocabulary to describe events that most of us cannot imagine. It is well written and flows easily. I highly recommend this book for anyone wanting to know what it was like to be a navigator in a Lancaster bomber duelling with night fighters in the flak filled skies of Germany and also anyone interested in the moral aspects of strategic bombing.

Professor Frank Musgrove's thoughtful book on his experiences as a wartime Bomber Command navigator was first published in 2005. Now Dresden and the Heavy Bombers has been reissued and it is well worth reading for various reasons.

Musgrove gives the best account I have ever read of what a Lancaster nav did and the circumstances in which he worked.

Frank Musgrove was a commissioned navigator in the RAF and completed a tour of bombing missions over Germany in heavy bombers during World War II. After his service he became a professor of sociology at the University of Manchester and has been published extensively in the field of social sciences.

Hundreds of bombers launch a massive Allied air raid against the city of Dresden, Germany. Over a three-day period, 3,900 tons of explosives and incendiaries were dropped by 1,300 British and American aircraft, reducing much of the city to smoldering rubble and killing between 35,000 and 135,000 civilians. Dresden had been famous for its historic buildings and artwork until it became the victim of the most destructive air raid of the World War II.