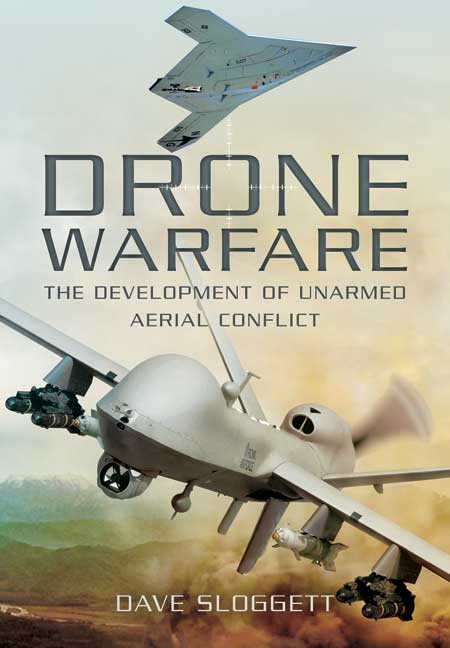 The Development of Unmanned Aerial Conflict

Add to Basket
Add to Wishlist
You'll be £19.99 closer to your next £10.00 credit when you purchase Drone Warfare. What's this?
+£4.50 UK Delivery or free UK delivery if order is over £35
(click here for international delivery rates)

The Development of Unmanned Aerial Conflict will examine the development and use of aerial drones, a topical subject that has not been written on to date.

An unmanned aerial vehicle, commonly known as a drone, is an aircraft without a human pilot on board. Its flight is either controlled autonomously by computers in the vehicle, or under the remote control of a navigator or pilot on the ground or in another vehicle.

Blending history with current and recent operations, Dr Sloggett will set out to put the record straight. In some quarters of the press drones get a bad press and there has been much controversy over their deployment, some of which is not deserved.

The book reveals the history of unmanned aircraft, their recent development and why they have emerged onto the scene. Why did the US, for example, really invest highly in drone technology? When did all that start? What barriers had to be overcome? What was there before drones arrived?

The book also analyses their operations in Iraq in Gulf War Two and more recently Afghanistan. What roles did drones play? Where they successful? What new developments emerged during operations? Did they save lives? Further to this is a detailed look at case studies where they have been used trying to remove some of the incorrect reporting – putting the record straight based on evidence. How many have been shot down and where?

The book then looks at strategic uses of drones at present: Iran is being monitored; they are already in action over parts of Africa; what are other countries doing – China, Iran? Turkey?

The RAF's use of drones, their deployment and operations is considered along with important questions such as where this goes for the future. What are the issues? Will all air forces be drone based in the future? What other applications may arise in the civilian market?

This excellent book blends history with recent developments and operations... A 'must read' for both aviation buffs and those involved in academic study of this increasingly influential aspect of air power.

Everything one would expect from so distinguished and such a well-informed author.

Drone warfare. At first I thought it sounded like an apt title for this book. However, the more I read the more I became fascinated and drawn in with the history. We now live in a generation of high tech computer geeks. My 14 year-old son has the frightening ability to multitask in a frightening manner. He can text on his mobile phone,watch TV, play his XBoxandrevise and do his school homework …. Or so he thinks! The truth of the matter is though; he probably could! And that breeds new thinking, new minds and new ways to soldier .

It reminds me of the opening of Jeff Wayne’s War of the Worlds.…Minds immeasurably superior to ours regarded this earth with envious eyes. That is truth in its purest form. What was once science fiction is now science fact. Robotic eyes gazing upon the very Earth on which we all walk, or in the case of Dr David Sloggett’s book, the very battlefields on which we fight.

Sloggett pursues the very complex background story of manless flight.The concept of having eyes in the sky is by no means a new one. The French had the vision of hot air balloons above the battlefield, The Americans, bogged down in their Civil War forged ahead with the experiments – forming the Union Army Balloon Corps in the process and during the Boer War the British relied upon them as a source of intelligence so much so they couldn’t have them made quickly enough.

But .who’d have thought that a little over twenty-five years after the end of the stalemate and hell of World War One that Hitler’s Germany would be sending pilotless aircraft over the channel to bomb mainland Britain? Not just the odd one or two, but thousands. The dreaded V1 or Doodlebug is generally accepted as the first real drone in the strictest sense and it set the bar for ingenuity. It’s also probably the most infamous of drones and ironically the most misunderstood. The V1 was only ever fired at Britain from June 1944 to March 1945. That said the weapon accounted for the lives of some 5,476 people. There was clearly a ‘market’ for such a weapon.

As World War 2 heated up and then burnt to it’s final climax it was the Americans who took over from the Germans as the leaders in the field. The British, exhausted and penniless from six years of war were close on their heels. This is where the book gets slightly complicated. Add the space race, a hint of atomic Russia and a large helping of Cold War and the book becomes an avalanche of abbreviations like UMA’s (Unmanned Aircraft) or RPV’s (Remotely Piloted Vehicle) and whole new words and phrases like MOLE CRICKET 19 and SIGINT!

This isn’t to say the book isn’t interesting, because it is; surprisingly so, in fact. This is merely a warning to those looking for a casual read on the train home. This probably isn’t for you.

With eight chapters charting the history, a page on terminology and an abbreviations list that even the most learned of military buffs would be hard to tick off more than, say, half a dozen; this is the sort of book you lock yourself in a room with and with head scratching go in a paragraph at a time.

Sloggett’s passion for his subject is apparent on every page though it’s his expertise that you have to marvel at. A scientific advisor for over forty years in all the major conflicts that Britain has involved itself in since the late 70s he clearly is qualified to baffle and lure in any casual reader and leave punch drunk those foolish enough to read more than two sentences without stopping for breath.

The book mentions George Lucas’ Star Wars, and Kubrick’s 2001 : A Space Odyssey in the same preface as IEDs and Somalian pirates and yet not once is it comical or tongue in cheek. It merely points to the fact that drones or robotic drones, to be precise, are much more widely used and discussed than we probably realise.

This book will educate and intrigue and I guarantee that next time you’re watching the conflict in Afghanistan on the 9 o’clock news you will be studying the aerial shots with new found zeal, probably wondering what FATA or AQAP is involved this time!

For those looking to learn more about what were once referred to by the mass media as 'venomous little insects' this has to be the best, highly readable account of UAVs.