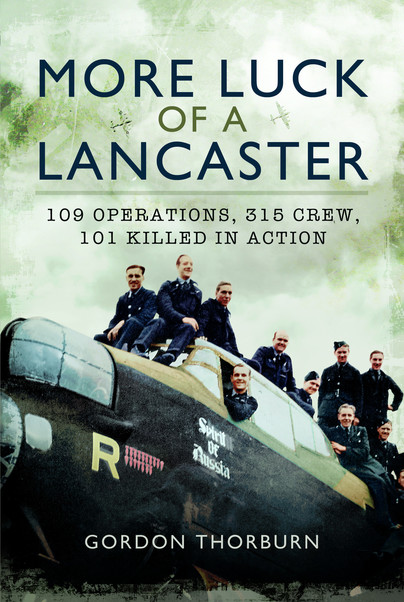 More Luck of a Lancaster (Hardback)

As featured in the Mail Online: The luckiest Lancaster: Bomber that survived 109 WWII missions only to be deliberately set on fire in a training exercise

You'll be £10.00 closer to your next £10.00 credit when you purchase More Luck of a Lancaster. What's this?
+£4.50 UK Delivery or free UK delivery if order is over £35
(click here for international delivery rates)

From 11 June 1943 (the date of Lancaster Mark III EE136 WS/R's first op) to her last with 9 Squadron (on 19 October 1944), eighty-six Lancasters were assigned to Number 9. Of these, fifty were lost to enemy action, another five crashed at home, three crashed in Russia on the first Tirpitz raid and four were transferred to other squadrons only to be lost by them, leaving just twenty-four still flying.

As more came in, three of those twenty-four were transferred to a new squadron, the reforming No 189. These were EE136 (93 operations), PB146 (36 ops), and LM745 (four ops). All three saw the war out, unlike so many others. During 189 Squadron's operational period featuring EE136 (1 November 1944 to 3 February 1945) thirty-four Lancasters came on the strength of which nine were lost in that time. Over the operational lifetime of Lancaster EE136, forty-two different skippers took her on her grand total of 109 trips. Altogether, 315 men flew on ops in this machine, many of them more than once - the most 'capped' captain, F/O Roy Lake, twenty-two times - and of those men, 101 were killed in other aircraft.

Those are the statistics. But this is the story of the men behind the numbers.

I have always enjoyed the catalogue of Pen and Sword’s Air War publications, however Gordon Thorburn’s text of More Luck of a Lancaster had a major impact upon me. I found the material to be both engrossing and have great emotional depth, something rather rare in books today. One of my relatives served in the RAF and was downed in July 1944 supporting the Normandy follow-up operations, so the books story was impactful. Gordon Thorburn has developed a very solid read on what the airmen of the period experienced and how the campaign developed over Europe in a way that far exceeds the toll of statistics of each bomber wing. There is a great deal worth noting within the material that I found to be fresh and new, so for even the largest RAF or Allied Air enthusiast this book is well worth devoting some time to. The photos were well done and a nice collection of shots of the crew members as well as the cover art which I found stellar. It was a segment of the Allied War effort which looking back and reviewing was fraught with constant danger as sheer boredom at times. Yet the story develops and builds almost a real feel of the period and what it was like to serve in the air war and the grand bomber planes which had such an impact upon the Allied Victory. The squadron list and Pilot Officer listing are superbly detailed information and the planes individual Roll of Honour exceptional in scope. The text itself is not a long study, but has great flow and is packed with a large volume of information. I enjoyed the organization of the book greatly and either for the general historical enthusiast or an advanced RAF Bomber Command expert the book stands up well to inspection or perhaps excels in bringing to life those who fought, some not surviving the operations. RAF Bardley and the Ninth Squadron are prominent as are the command and operations undertaken.

It is my opinion that Thorburn does a fantastic job in relating the general experience of the crew, and their missions, and the overall campaign history, which is covered well, and the melding of the men. This Commonwealth experience makes his book exceptional in my opinion as there really was the joint Allied effort and participation from the Empire far and wide. Beyond the book’s great coverage of the fighting men is also the technical side of the operations and within the larger campaign. The various flow of combat peaks and valleys is also well documented. I would greatly recommend this book for a few different readership groups and not merely one segment of historical readers. The Air War reader will enjoy it completely, and yet even those new to historical study of the campaign or Second World War should get a good deal of information from Thorburn’s work. For the expert or Bomber Command supporters and family it provides a close up in-depth look inside the world of these men which surpasses many larger or more well-known books. It is a stellar text which hopefully spurs on wider scholarship within the studies of the RAF Bomber Command and the men who served it.

First things first, I read this book in two sittings. It's not a particularly long book (147 pages) but it is gripping, exciting and it receives, from me, a book-lovers highest recommendation, 'I couldn't put it down'. It is a rare non-fiction book where I find myself reading long into the small hours and wanting to find out how the crew fared on their next sortie.