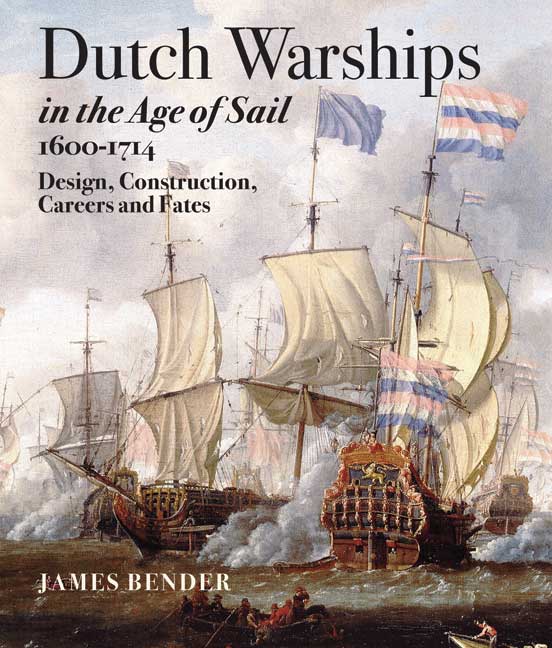 For most of the seventeenth century the Netherlands constituted the most important maritime power in the world, with by far the largest merchant fleet and a dominance in seaborne trade that other countries feared and envied. Born out of an 80-year struggle against Spain for independence, the Dutch republic relied on naval power to guarantee its freedom, promote its trade and defend its overseas colonies. The Dutch navy was crucial to its survival and success, yet the ships that made up its fleets are among the least studied of any in the age of sail. The reasons for this include a decentralised administration of five separate admiralties, often producing ships of the same name at the same time, the widespread co-opting of merchantmen into naval fleets, and competing systems of measuring ships, all of which leads to confusion and error.
The most significant contribution of this book is to produce the first definitive listing of all Dutch fighting ships – whether purpose-built, purchased, hired or captured – from the heyday of the United Provinces, complete with technical details and summaries of their careers. It also provides an appreciation of the administrative, economic and technical background, and outlines the many campaigns fought by one of the most successful navies in history.
With its unique depth of information, this is a work of the utmost importance to every naval historian and general reader interested in the navies of the sailing era.

Any specialist study which relies heavily on meticulous research based on primary sources in a language other than English is to be applauded.
Dutch Warships in the Age of Sail is certainly that. It will be welcomed by those with an interest in the various campaigns and battles fought during a complex period when allies quickly became enemies and vice versa, while those who simply gaze and the wonderful examples of marine art in museums depicting the warships and engagements of the time will find the factual information contained here very useful in understanding this important era of naval history.

A useful step forward in opening up the Dutch archives to a British audience and complements the books listed in the Notes and Sources sections.

The author can only be complimented on his effort. In 25 years Bender has brought together countless sources to get a complete list of all Dutch warships. This book can be researched independently, but also as part of the series 'The Age of Sail'.

By bringing together the names of all Dutch warships that served during the many battles of the 'long' seventeenth century, the author [has]responded to a long-cherished wish of many maritime historians.

For the Dutch, the seventeenth century is the Golden Era, and the prosperity and sense of well-being and security the citizens of the republic enjoyed are captured in the art of the time. Prosperity, well-being, and security, however, had to be safeguarded.

Landward defense rested on the complex system of rivers, canals, and fortresses that insulated the republic from the territories around it that were dominated first by the Spanish and later by the French. The seaward defenses were the fleets that protected the fisheries and coastal waters, that escorted convoys of merchantmen in the narrow seas, the Mediterranean, and the Baltic and across the oceans, and which demonstrated the republic’s ability to defend itself and its interests.

James Bender has spent the past quarter century identifying these and other vessels that made up the Dutch fleets of the Golden Era. He has combined archives in the Netherlands, in Sweden, the UK, and elsewhere to produce a comprehensive inventory of Dutch naval power and capabilities from the beginning of the revolt against Spain to the decline of the Netherlands as a naval power in the eighteenth century.

The first section of the book is a series of fleet lists, each with the names of vessels and their commanders in specific actions, such as the 1688 invasion of England. The next and much lengthier section gives the history of each ship, from her construction to her ultimate fate. The text is copiously illustrated with prints of many of the ships or of each class of vessel, and the result is a cornucopia of information for anyone studying the performance of the Dutch navy during the Golden Era or the evolution of naval design in the period.

The introduction by David Davies is a study in its own right. Davies traces the development of the navy through the seventeenth century and explains the complex organization through which the States General – the republic’s government – commanded and controlled the fleet and through which the provinces, the East India Company, the West India Company, and groups of merchants provided the fleet with vessels and materiel.

These vessels were expressions of pride that find visible form in the elaborately decorated taffrails of the vessels in the accompanying illustrations, which are mostly sketches by Willem van der Velde, father and son that are now in the National Maritime Museum at Greenwich in England.

This is not a book for the general reader but one for specialists, whether they be academic researchers, war gamers, or those who simply wish to admire van der Velde’s brilliant sketches without going to Greenwich. University and other librarians should include this book on their Christmas wish lists.

The introduction on its own could form a book in its own right... This is certainly a book to be dipped into and James Bender is to be soundly congratulated on this first class publication providing significant detail of many vessels.

This book is ideal for the naval historian.

A fascinating book for anyone interested in this exciting period of seafaring.

Beautifully-produced to a very high quality level, this is an indispensable volume for any researcher, maritime historian or serious student of the naval ships of the major seapower that was the Dutch Netherlands of the 17th Century.

JAMES BENDER developed an interest in the great Anglo-Dutch sea fights of the 17th century as a wargamer, but the search for definitive information on the ships involved led to a decade of intense research. This book is the result.