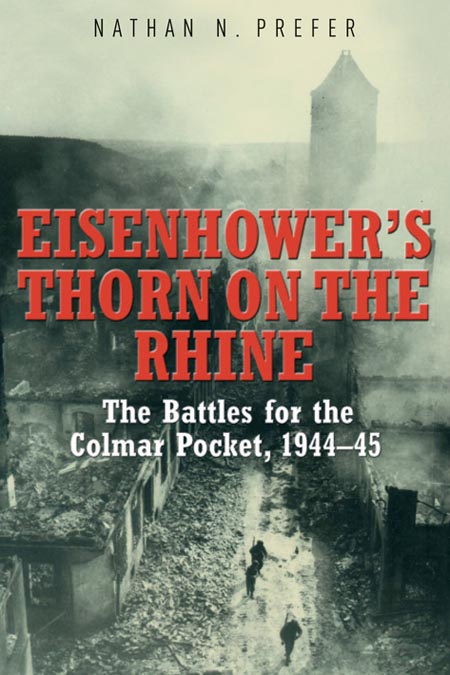 Eisenhower’s Thorn on the Rhine (Hardback)

Add to Basket
Add to Wishlist
You'll be £25.00 closer to your next £10.00 credit when you purchase Eisenhower’s Thorn on the Rhine. What's this?
+£4.50 UK Delivery or free UK delivery if order is over £35
(click here for international delivery rates)

By the fall of 1944 the Western Allies appeared to be having it all their own way. The summer's Normandy invasion had finally succeeded and the Germans had been driven out of northern France and most of the Low Countries. In September the invasion of France's southern coast had met less opposition and Allied divisions had begun lining up along the Rhine. But while the Americans were about to meet a nasty surprise in the Ardennes, the Germans never did let go of the province of Alsace, and in a hard pocket around the city of Colmar continued to resist. On New Year's Eve they launched a counteroffensive, Operation Northwind, that nearly put Allied forces back on their heels. While the Allies were eventually able to take care of their Ardennes problem the Colmar one still remained. On January 12, 1945, Eisenhower could only tell George Marshall, &ldquo;It is a very bad thorn in our side today.&quot; This is the story of the Sixth Army Group (7th US &amp; 1st French Armies) which fought on the southern flank of the SHAEF front. The French had multiple problems during this campaign so that increasing number of US divisions needed to take part. In the process the 3rd and 28th Infantry Divisions, and 10th and 14th Armored, among others were able to cover themselves with heroism, though hardly less than the threadbare German 19th Army, which bravely resisted against enormous odds until finally the west bank of the Rhine was cleared. Amidst a horrific winter and rough terrain, interspersed by demolished towns, both sides traded blows in a ferocious campaign often neglected in histories of the war. This book informs us fully of the tremendous and costly struggle waged on that often-neglected sector of the front.

Nathan N. Prefer has written a number of highly acclaimed works on both the European and Pacific theatres of World War II, including Patton's Ghost Corps, Vinegar Joe's War, and The Battle for Tinian, the first-ever book that descirbedd the tough battle for that island near Saipan that gave the US its launching pad for the atomic attacks on Japan. A former Marine reservist, he has most recently written Leyte: The Soldiers' Battle, which at long last unveiled the Phillipines campaign as a costly slog-match for US troops against the Japanese Army, instead of merely the quick naval action for which it is best known. With this wirk on the Colmar Pocket in the ETO, Prefer furthers his reputation for revealing unsung battles in World War II. He currently resides in Fort Myers, Florida.