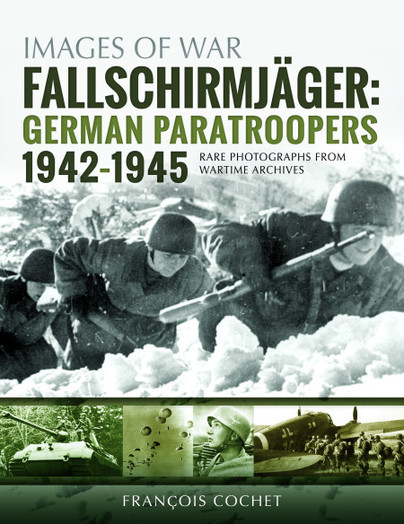 Add to Basket
Add to Wishlist
You'll be £14.99 closer to your next £10.00 credit when you purchase Fallschirmjäger: German Paratroopers - 1942–1945. What's this?
+£4.50 UK Delivery or free UK delivery if order is over £35
(click here for international delivery rates)

As elite troops, the German Fallschirmjäger (paratroopers) were regularly engaged in front line combat during the Second World War. Their famed actions such as the fighting in Scandinavia, the taking of the Belgian fortress Eden-Emal in May 1940, and the Battle for Crete just a year later, have given them the reputation of being determined, courageous and loyal soldiers.

This book continues the pictorial history of the Fallschirmjäger, focusing on the period following the bloody Battle for Crete. Used as elite infantry, first in the USSR and then in Africa, the Fallschirmjäger were able to reconnect with their glorious past, whether in Italy or on the Greek Islands, as they jumped from their Ju 52s to engage the enemy.

Their hard fighting in Italy helped to cement the legend of 'the Green Devils', with the British General Harold Alexander describing them as 'tenacious, highly-trained men, hardened by their many actions and combats'. However, during the fighting in Normandy, the Ardennes and on the Eastern Front, the number of veterans decreased, meaning it was the young German paratroopers who finally surrendered the III Reich on 8 May 1945.

The second of Cochet’s books in the “Images of War” series picks up the story of the fallschirmjäger from 1942 when “the majority of paratroop units were brought back to the Reich to reform and rebuild” (p. 11). We then follow them in action in the major battles of the Reich from the Aegean and Italy, to the USSR, France, Holland, Germany and finally Berlin. Once again the range of photographs is a particular feature of the book. This second volume includes a number of images of fallen fallschirmjäger. These brief vignettes of men who served and died adds greatly to the power and impact of the book, bringing the reader closer to those who were part of this famous unit in World War II.

Having reviewed both books by Francois Cochet, I have to say he has done an excellent job in his telling of the famous "Green Devils". The pair are an excellent read for the historian and model maker alike, coupled with some very rare archive black and white photos. Cochet does tend to be partisan towards the Fallschirmjägers, delicately circumnavigation atrocities committed by the units and papering over any of distasteful bits.

I rate this volume as highly as the first so it's 4½ out 5 from me.

The second part of Francois Cochet's photographic history of the Fallschirmjager, looking at the middle to late war period where the airborne role was all but abandoned as they became an elite infantry reserve which participated in innumerable bloody defensive battles until the end of the war. The chapters take in an exceptionally broad range of theatres, beginning with anti-partisan operations in Russia, training exercises in France, and the defence of Tunisia. A couple of airborne swansongs are featured, including the famous raid to free Mussolini, and the successful but much less known capture of Leros in 1943; the last large-scale airborne operation attempted by the Germans. It goes on to show the hard fighting around Anzio and Monte Cassino in Italy, where the Fallschirmjager cemented their reputation as tenacious defenders, and the bitterly fought campaigns on the Eastern Front, Normandy, and the Low Countries, culminating in their inevitable collapse in Germany. The photographs are similarly diverse in their subject matter, and display a range of uniforms, camouflaged clothing and techniques, the equipment they used, and the organisation of their positions.

This is another IoW book covering the history of the Fallschirmjager, this time in taking their story from 1942 to 1945 – Highly Recommended

A well illustrated brief history of the German airborne... Very interesting photographs though. Great book for re-enactors and modellers.

The quality of this book and its photos is very good. A book I recommend!

Another fine book in the Images of War series.

This title as part of the Images at War series is an exceptional addition to the range because it the most human of the titles I have looked at thus far. The visual reference provided is good in what it offers as regards the Fallschirmjäger in training and the field, but for me it represents how people interact when thrown into alien environments and instructed to do things against natural inclinations.