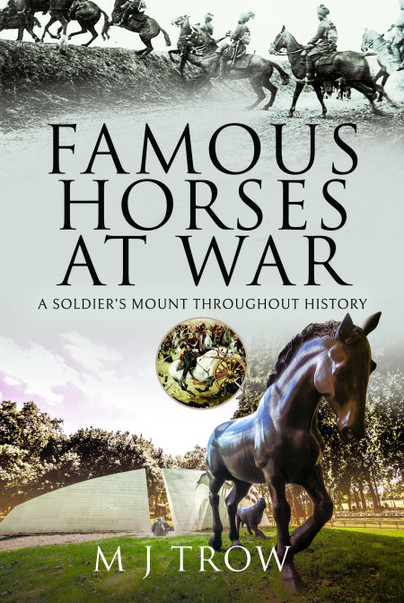 A Soldier's Mount Throughout History

Add to Basket
Add to Wishlist
You'll be £20.00 closer to your next £10.00 credit when you purchase Famous Horses at War. What's this?
+£4.50 UK Delivery or free UK delivery if order is over £35
(click here for international delivery rates)

In the days of horsed cavalry, a soldier's mount was a living, breathing companion. It galloped into the jaws of death at the sound of the bugle and the nudge of spurs. It carried its rider over arid deserts, across swollen rivers, up near-sheer mountains. Whole societies functioned because of the warhorse - the Huns, the Mongols, and the tribes of the North American plains. Horses were worshipped as gods - the centaurs of ancient Greece, Tziminchak of the Aztecs, while the Roman emperor Caligula intended to make his horse a consul!

Most of us have only ever seen warhorses at the movies - the Scots Greys at Waterloo, the Light Brigade at Balaclava, Taras Bulba's Cossacks on the Steppes and Custer's cavalry at the Little Big Horn. This book celebrates the colour and nostalgia of a fighting past, from eohippus the first horse to Sefton, the last warhorse injured in the line of duty. Not forgetting the stark reality of thousands of animals sacrificed for men's greed and ambition, those killed on campaign, the maimed cab-horses and fodder for the knacker's yard.

Humans should be grateful that horses have decided to befriend and work for and with us. Humans have benefitted more from the pact than war horses. At lease 8 million horses and mules were killed in World War I alone, but many people do and did have a love for horses. Author Trow starts with a bombing in the 1980's with one of the Royal Army horses, Sefton, who survived, receiving thousands of get-well cards and raising money for a hospital wing. Trow then takes readers back millions of years to eohippus, mesohippus, and to the possibly first domestication of horses in the Eurasian steppes by the Botai people in Kazakhstan. He is clear in this section of ancient history that some theories are just that, theories. However, the horse is the most frequently depicted animal in Paleolithic cave art and horses in a military setting appear as far back as Assyria. Readers learn about famous war horses through time and place, but also something about the soldiers and peoples who rode them, even including a chapter on Hollywood films and horses. Although there is dispute, the last major cavalry charge was in November 1941 in Russia when about 2,000 horses and their riders were killed in 10 minutes by the invading Germans. The author has an easy-to-read style with a little humor thrown in that I have enjoyed in his other books. There is also a helpful bibliography.

Great book honouring war horses who lost their lives while serving during war.