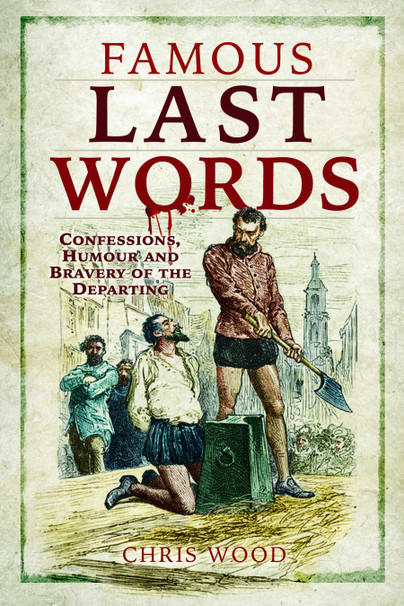 Confessions, Humour and Bravery of the Departing

As featured on BBC Radio Newcastle! Listen to the author interview here

You'll be £11.99 closer to your next £10.00 credit when you purchase Famous Last Words. What's this?
+£4.50 UK Delivery or free UK delivery if order is over £35
(click here for international delivery rates)

Nothing focuses the mind more starkly than impending death. Its inevitable spectre greets us all; from princes to paupers and nobility to the needy. Prepare to mount the scaffold and share in the final utterings of the condemned; join the stricken in their death beds and witness unburdened tongues wag their closing, and often remarkable confessions as deeply entrenched secrets are finally unshackled in the wake of imminent death.

‘Famous Last Words’ collects a fascinating selection of destinies culminating in their often flamboyant yet always captivating, final utterances before shuffling off this mortal coil.

Writer and poet Sir Walter Raleigh had some typically forthright and urging words for his executioner as the hesitant axeman displayed fear and reluctance to perform his stately duties. Having felt the sharp edge of the tool that would presently be rained down upon him, rather than fearing his impending doom, Raleigh would offer goading encouragement to his maker.

Were the final words of convicted murderer Ernest Brown a candid confession to another killing he had committed deep in the Northumberland Moors some two years previously which had lay unsolved?

And what of Britain’s first actor to have had a knighthood bestowed upon him? Learn of the staggering irony that saw his final words on stage prophetically turn out to be his last in life…


A Morpeth resident’s debut book looks into the stories behind the final utterings said, or reported to have been said, that include bravery, irony and confessions.

The inevitable spectre of death greets us all, from princes to paupers. So prepare to mount the scaffold and share in the final utterings of the condemned, join the stricken in their death beds and witness unburdened tongues wag their closing, often remarkable confessions as deeply entrenched secrets are finally unshackled in the shadow of imminent death.

The book is well written and doesn’t pretend to be too gory or salacious. The book has been well researched and there was a good variety throughout time, with each chapter representing each character. A fun balanced book with something for every to get their nose into.

This is an enjoyable book, and an easy “read a chapter before bed” sort of thing. Pen and Sword did a Similarly structured book a while back called First World War Trials and Executions that I also enjoyed a lot for the exact same reason. It’s full of interesting facts and had some things, being outside of the UK, that I was unaware of. Definitely recommended.

Perfect for the macabre loving and historical fans like myself. Definitely would like to read more about this particular subject in the future.

As featured on BBC Radio Newcastle with Lisa Shaw!

'Famous Last Words collates a fascinating selection of utterings from those about to leave this Earth and the circumstances that surround it.'

This is a fascinating account of the deaths of 23 historical figures. They range from the very well known (Lady Jane Grey, William Burke) to the previously unfamiliar (to me). The accounts are written simply and engagingly in plain language. Despite the often gruesome nature of the murders, poisonings, and other crimes which led directly to the executions, the descriptions are neither too graphic nor disturbing (most of them happened many many years ago and have lost the immediacy of horror). They're not all executions, several are related stories from the deaths of non-criminals (Liam Whelan, Sir Henry Irving)... This would be a good selection for library acquisition, or for history fans. It would also be a good choice for true crime fans.

This was a really entertaining read.Easily put down and picked back up as there were many different stories to become engrossed in.I thought when I picked this up that some of the more famous names would interest me the most but all the stories were fascinating in their own right.Although,I particularly liked Walter Raleigh's tale,Robert Catesby and the lookout from the Titanic,Fred Fleet.It was well written,informative and a much needed compelling distraction.

This wow! book details the circumstances surrounding deaths (natural, executions, suicide) and the last words spoken by the person(s) who died when they realized death was imminent. Some are surprising, some proclaimed innocence to the end whether they were innocent of a crime or not, others poignant and heartbreaking. From confessions to allusions to secrets to words of love to instructions to the executioner, this book is unputdownable in its intensity and captivation. Most of the stories took place in the last few hundred years with a few more recent and highlight both famous and not famous people.

When hanging and beheading were de rigueur, executioners were paid for good "service". Some executions occurred swiftly as planned but some were unfortunately drawn out. Bodies were often used for scientific research and some took it upon themselves to hasten deaths for payment. Mary Blandy was concerned about propriety when she was hung. Many last words were pleas to their Maker such as Sir Henry Irving's which those he used on stage during performances, "O Lord Into Thy hands". King Edward VI's were similar as were Lady Jane Grey's, while she pathetically groped for the beheading stone. Every single story is incredibly interesting including the Charles Smith book made of his skin!

Suicide notes are goosebump inducing, moving and poignant and the last despairing and revealing moments of the person's life are sometimes recorded in detail. The most heartbreaking to me was the letter from a father to his daughter. A few saw a humorous side, others instructive. Murderer Burke said, "The knot's behind" to his executioner (should have been to the side). A few shook hands with their executioner and thanked prison staff for good treatment. The degrading ducking story was just awful...the man responsible asked for forgiveness at his death. Another man blamed women for his downfall and one pleaded innocence until he was executed and it was discovered later that he indeed had been innocent. One couple recited wedding vows to each other just seconds before they were hung.

There are photos of locations and suicide letters. If you are at all intrigued by a sociological compendium of true death events and how various people viewed death in their last moments, this book is definitely for you.

My sincere thank you to Pen & Sword and NetGalley for the privilege of reading the e-ARC of this fascinating book. Well worth reading!

What an amazing book. It was not what I expected so was pleasantly surprised. It featured the last words of famous people like Sir Walter Raleigh, Lady Jane Grey, William Burke to name a few but it also featured last words from very little known people whose words were quite prophetic and lingered. Some were admissions to guilt of crimes from the past which then solved it, but some were also from people protesting their innocence which later (Too late) were sadly proven right. Chris Wood has clearly done his research and is to be commended for it. I found it to be really interesting and addictive reading. I look forward to more from this author.

My morbid soul had a wonderful time reading Famous Last Words, and I would recommend it to anyone looking for an enjoyable nonfiction that they can read in one gulp, or in bite-sized chapters. Either way, there are some quotes in here that, in my opinion, have more than earned a total mic-drop.

It is extremely well researched and the author has a great writing style which kept me engaged. I highly recommend it to anyone interested in the history and crimes of the past.

We have all heard the stories of the last words spoken before someone is put to death. Usually, it was in cases of medieval beheadings, etc. But this book goes beyond that, taking into account different cases over history, and sharing the crimes, the verdicts, and the final walks of those convicted, giving us a more full story of the punishment - and the crime.

For true crime lovers, this is a great delve into different cases, horrendous murders, and those convicted. For historians, its a glance back into the past, and the immortal last words spoken by those condemned. Chris Wood went above and beyond the expectations I had for this book (even though I thought it sounded fabulous from the title, I was not sure how the content would be arranged), but it was easy to read, and the facts and cases keep you pulled in. Prepare for a book hangover, because once you start this book, you will not be able to put it down until you have finished the last sentence.

I absolutely loved this book!

I really Loved reading this it was very informative and interesting. Worth a read!would definitely recommend!!

“Famous Last Words” by Chris Wood is a book that caught my eye immediately. Maybe it’s the darker side of my personality speaking, but I really liked the idea of reading the last words spoken by people at the moment they were facing their death. It was immensely interesting reading the words spoken and imagining the person uttering those very words as they were preparing to die. Being an avid fan of everything history (and macabre!), I couldn’t pass up the opportunity of reading this book. It was almost like an historical journey back into the lives of well known people who have lived and died. It may not appeal to everyone, but it’s a book that will definitely appeal to all history fans and those who are curious about what goes through a person’s mind in the moments leading up to their death.

As a freelance writer and researcher, Chris Wood has written for the popular UK True Crime Podcast and is a student of criminology and psychology. This is his debut book around a subject which has captivated him from an early age. He lives in Northumberland with his wife and daughter, where they enjoy exploring the rugged beauty of England’s northernmost county.