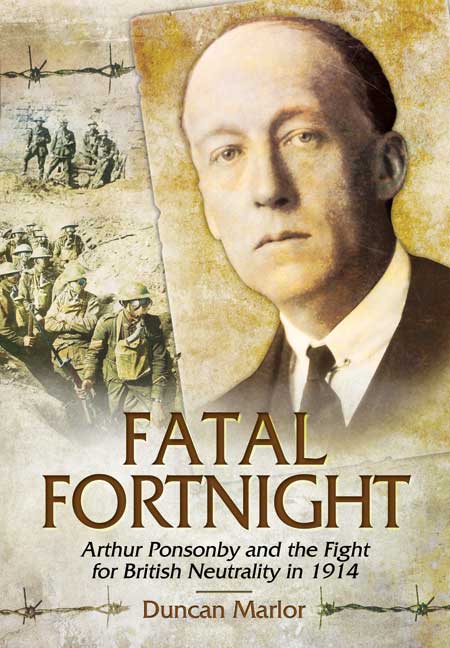 Arthur Ponsonby and the Fight for British Neutrality in 1914

Shortlisted for First World War Book of the Year

Duncan Marlor's Fatal Fortnight has been shortlisted in the WWI Book of the Year category of the Paddy Power Political Book Awards 2015.
You'll be £25.00 closer to your next £10.00 credit when you purchase Fatal Fortnight. What's this?
+£4.50 UK Delivery or free UK delivery if order is over £35
(click here for international delivery rates)

Much has been published about how Britain's ruling circle came to its decision for war in 1914 but little about what rank and file Members of Parliament thought and did as the continental 'Armageddon' drew closer. Fatal Fortnight tells the story of Arthur Ponsonby, and his backbench Liberal Foreign Affairs Committee. The book describes the suspense around Parliament as the skies darkened. It tells how, after the Foreign Secretary made his proposal that Britain should go in, Ponsonby's friend Philip Morrell stood up and called for a general debate, in the teeth of the fury of those who wanted Britain to get straight into the war. It describes how the neutralists, led by Ponsonby, made their passionate case in the fateful hours as Britain hung between peace and war.

The book looks at the concealment from Parliament of the military understanding with France, and the issues of war and democracy which are still with us today. It re-examines the arguments and reflects on how the world might have been had the 1914 decision gone a different way.

Alongside the political drama a human story emerges of how family support for Ponsonby and his allies sustained them as the world closed in.

Marlor's study makes good use of archival sources including the private papers and diaries of those connected to the Liberal back bench committee, as well as a large collection of secondary sources.
An informative study.

'Fatal Fortnight'...has enjoyed a whirlwind success and has now been nominated in the World War One Book of the Year category in the Political Book of the Year awards. [It] re-examines the arguments heard by the House of Commons against British entry into World War One and took the author ten years to write. Duncan went to great lengths to research the book over the past decade, including visiting libraries, archive offices and newspapers.

As featured on BBC Radio Derby.

A compelling book that re-examines the arguments heard by the House of Commons against British entry into the war and reflects on how the world might have been had the decision gone a different way.

A graphic, groundbreaking and poignant account of the attempt by Arthur Ponsonby and other MPs to keep Britain out of the war.

Amid this year's tsunami of 1914 books, rather overlooked was Duncan Marlor's Fatal Fortnight (Frontline Books)...a graphic groundbreaking and poignant account of the attempt by Arthur Ponsonby and other MPs to keep Britain out of the war.

...a highly compelling account on the 100th anniversary of the start of the war, when most media concentrate on the Western Front, and ignore the whole lead-up to the war. At the very heart of debate was Arthur Ponsonby, a champion of social reform and democratic foreign policy, who loathed war and constantly sought alternatives to conflict.
This makes for a fascinating view of British politics in the days leading up to the declaration of war.
Worthy of any Great War bookshelf. 10/10.

As seen in the Midhurst & Petworth Observer.

In the flood of books and programmes about the outbreak of the First World War, a hundred years ago this July, here's one that stands out as a must-read for anyone who's interested in politics and Parliament. A fascinating story well told.

A marvellous book . . . it is very well done in every way . . . It is very well documented (and for many readers, the great bulk of the primary material, from Shulbrede especially, will be fresh and thought-provoking). Duncan Marlor tells the tale as an unfolding dramatic narrative, with the parliamentary dissenters at the very centre. He writes in a combative spirit and in an enviably accessible style, challenging many of the old fatalistic 'no alternative' myths. Fatal Fortnight captivates the reader and is a delight to read - exactly the right combination of fascinating personalities and nerve-jangling events, located in time and place. It makes sense of complicated and tragic history, and is a study of the defiant minority - which was so much larger than the fatalistic histories are willing to concede.'

DOUGLAS NEWTON, author of The Darkest Days: The Truth Behind Britain's Rush To War, 1914

With extensive use of primary sources, Fatal Fortnight tackles a much-neglected subject. The author covers relatively untrodden ground in a creative way.