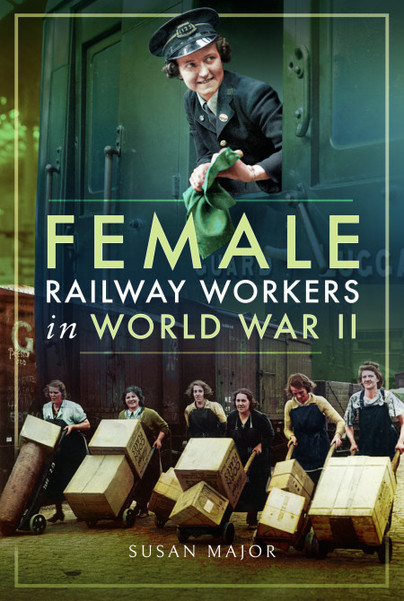 Add to Basket
Add to Wishlist
You'll be £14.99 closer to your next £10.00 credit when you purchase Female Railway Workers in World War II. What's this?
+£4.50 UK Delivery or free UK delivery if order is over £35
(click here for international delivery rates)

During World War II women took on railway roles which were completely new to females. They worked as porters and guards, on the permanent way, and in maintenance and workshop operations. In this book Susan Major features the voices of women talking about their wartime railway experiences, using interviews by the Friends of the National Railway Museum. The interviews cover many areas of Britain.

Many were working in ‘men’s jobs’, or working with men for the first time, and these interviews offer tantalising glimpses of conditions, sometimes under great danger. What was it about railway work that attracted them? It’s fascinating to contrast their voices with the way they were portrayed in official publicity campaigns and in the light of attitudes to women working in the 1940s. These women talk about their difficulties in a workplace not designed for women – no toilets for example, the attitudes of their families, what they thought about American GIs and Italian POWs, how they coped with swearing and troublesome colleagues, rules about stockings. They describe devastating air raids and being thrust into tough responsibilities for the first time.

This book fills a gap, as most books on women’s wartime roles focus on the military services or industrial work. It offers valuable insights into the perceptions and concerns of these young women. As generations die out and families lose a direct connection, it becomes more important to be able to share their voices with a wider audience.

Overall this fascinating book, appealing to both transport and women historians, details the daily realities of life for women working on the railways during the Second World War. It does this effectively by using extracts from the oral history interviews, allowing these workers to tell their own stories, using their own words. Whilst there is still much more work to be done around the subject of women and the railway industry, this book acts as an excellent introduction to the subject and to the NAROH collection.

I can recommend this book wholeheartedly as a good read, as a distinct source of an important aspect of our social history, and in showing positive aspects of a terrible war.

"A well-chosen selection of photographs of women undertaking the full range of tasks enhances the stories."

Article: 'Those were the days - 1943: Elizabeth flies the flag for female rail workers' as featured by

Susan Major's introductory overview, her brief outlines at the start of each chapter, and the extracts which she has selected, combine to make this book an important contribution to British local and social history. It is a valuable addition to the history of women in Britain in World War Two, shedding light on a less familiar area of women's work. At the same time I believe that it will point the way to the study of the male railway workers who work alongside the women. The fact that the extracts come from many parts of the country adds to the book's attractions.

Susan Major has written previously about railway social history and this book fills a gap about women's work in wartime, which has previously tended to focus on the military services or industry.
In March 1941, Ernest Bevin, Minister of Labour launched a plea for 100,000 women to enrol for work in farms, factories and on the railways to replace men recruited into the forces. Within a year there were over 80,000 railway women working among other things as porters, painters, guards, ticket collectors, van drivers, mechanics, locomotive cleaners, and in track maintenance, signals and engineering workshops. They coped with expectations that women could not do the heavy physical work such as shifting goods traditionally reserved for men, the negative attitudes of some of their families, the need to balance child care with employment, and even the lack of female lavatories. Many were paid less than men doing the same work and despite having performed invaluable service contributing to the war effort, most were made redundant after 1945.
The book will be of interest both to social historians and railway enthusiasts, especially in what it exposes about attitudes to women and female employment three quarters of a century ago. Much of the content is transcribed interviews from the women themselves, describing such things as being thrust while very young into tough responsibilities for the first time, or living through devastating air-raids, when for example York Station was heavily bombed.
However were women ever allowed to become locomotive drivers and work on the footplate such as was happening on Soviet railways? Sadly not, the trade union taking the view that such physical work would not "fall within their physical capabilities and mental outlook." I would hope that a different view would prevail if we still had mainline steam locomotives in 2019.

Review by John Hutchings, Friends of the National Archives.

A fascinating account of the wartime working lives - sometimes dangerous under devastating air-raids - of the ladies working with men on the railway for the first time and taking on their roles to keep a vital service running. The book also provides an interesting insight into the railway women's perceptions and concerns they faced at the time.

Major is to be congratulated at ensuring that wartime memories are told, and that the women and their wartime work are remembered in their own words.

In this book Susan Major draws upon the National Railway Museum's National Archive of Railway Oral History and the research of Alan Hammond of the Somerset & Dorset Railway to present a panorama of the reminiscences of women employed on the railways in the Second World War.

As featured on The History Girls

As featured on Express Digital

This is an interesting record of an industry and a particular period in its history, and this archive of oral history is a valuable resource. I hope other industries have something similar.

Many women responded to the call and this book not only details the perceptions and concerns of women at this time but for family historians it will fill gaps in the lives of the women who were not only wartime workers but were wives, mother and daughters.

This book is a fascinating insight into six years of British railway history told by those who were there some 75 years ago. The social attitudes of the day and the working conditions are so different to today. It is well worth reading not only for its railway history but also for the social history of those turbulent six years. The author has made great use of NAROH; it is hoped that future books will draw on this valuable resource.

This interesting and readable book is a welcome addition which recognises the very great contribution the women made to the railways during WWII. It joins the recognition given to the Land Girls, the female steel workers of Sheffield, the pilots delivering RAF planes and many others that the Nation has been slow, or reluctant to acknowledge.

A worthy look at an under-reported area.

Author article 'Holding the line' as featured by

Every page contains fascinating reminiscences of what life was like for nearly six years.

This book is a fascinating insight in to six years of British railway history told by those who were there some 75 years ago. The social attitudes of the day and the working conditions are so different from today. It is well worth reading not only for its railway history but also for the social history of those turbulent six years. The author has made great use of NAROH; it is hoped that future books will draw on this valuable resource.

Even today this book is notable for being a railway history book written by a woman, about only women. Railways have tended to be a niche market, featured in books by men, for men; railway books authored by women are few and far between. War is often the way in for such books and such authors. War also presents a window of opportunity for women, not least because it brings them into the public arena and into mainstream consciousness.

In her introductory chapter Susan Major shows how women’s entry into railway work during the Second World War happened in fits and starts, overcoming the reluctance of company, union and railwaymen, as the Government made determined propaganda efforts to recruit these vital war workers while allaying men’s worries for their jobs. The other chapters are oral history in print, taken verbatim from recorded interviews. Here Major has forefronted the women’s own voices and allowed us to hear them directly. Their stories are cleverly placed under chapter headings that highlight their changing experiences over the war years.

What shines through is the pride the women took in ‘doing their bit’. This book is a fitting tribute.


Who Do You Think You Are? Magazine, October 2018 - reviewed by Dr Rosa Matheson

Article: 'When women ran the railways...' as featured by