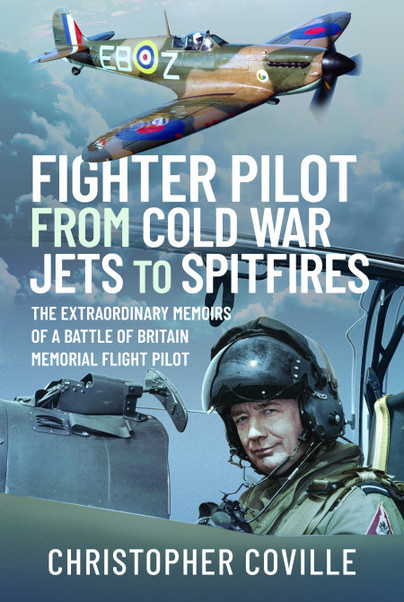 The Extraordinary Memoirs of a Battle of Britain Memorial Flight Pilot

Add to Basket
Add to Wishlist
You'll be £17.50 closer to your next £10.00 credit when you purchase Fighter Pilot: From Cold War Jets to Spitfires. What's this?
+£4.50 UK Delivery or free UK delivery if order is over £35
(click here for international delivery rates)

A young boy sits in the back of a Chipmunk aircraft at RAF Woodvale, near Liverpool. He has never flown in anything before. As the power goes on and the little aeroplane soars into a clear blue sky, he decides at once that this is the only thing he wants to do in life: to be an RAF pilot.

Fighter Pilot: From Cold War Jets to Spitfires tells the riveting story of how a boy from Liverpool, at the height of the Cold War, joined an RAF that was largely led by veterans of the Second World War. Christopher Coville arrived at the RAF College at Cranwell to find an environment shaped by English Public School traditions, but he made the grades needed to be streamed onto fighters, and went on to fly the Lightning, Phantom and Tornado F3 in the air defence role.

Christopher eventually became station commander of RAF Coningsby and while in that role flew with the Battle of Britain Memorial Flight, becoming the only station commander to qualify on the Hurricane, Spitfire and Lancaster. He also qualified on helicopters and multi-engine aircraft and became responsible for the quality of the displays performed by the Red Arrows, flying with them regularly. Along the way, he steered the RAF’s biggest re-equipment programme since 1945 during a tour at the Ministry of Defence and filling a challenging top NATO post during the wars in the Balkans.

While this is a book about a young man from Liverpool who joined from grammar school and became a three-star Air Marshal, it is also, above all, a story written by a passionate aviator, whose affection for flying leaps out of every line, in a book which is full of excitement, deep knowledge of flying and affection for his fellow servicemen and women. But it is also a wonderful narrative about people, the great characters forged by military life, and honed by fear, exhilaration, and occasional tragedy.

Fighter Pilot: From Cold War Jets to Spitfires is a unique perspective on aviation, written by a talented and dedicated pilot at the very top table of the RAF. This book culminates with his retirement, as the No.3 in the RAF, and being invited to have lunch with The Queen.

"From Cold War Jets to Spitfires is a fine record of the life and times of a senior commander who was focused on a definition of the main purposes of the Royal Air Force, to train, fly, fight and support and I strongly recommend it."

I thoroughly enjoyed this book. This is quite a remarkable autobiography and gives lots of dits from his leaving school and joining the RAF.

I have to declare an interest - I know Chris Coville through the RAF Association, and I was a few months ahead of him as a cadet at the RAF College Cranwell, so I know the subject, in the senses of both the individual and the period. There has been a flurry of autobiographies in the recent past by his contemporaries and mine. All cover the ground well, but few with the light touch Chris Coville has achieved. Hence, whilst the history comes over as well as any, he manages to give convey the flavour of the life of RAF officers and aircrew of our time.

Consequently I would recommend his book ahead of most others of the same genre. It is a very good read.

Chris Coville was a lad from Liverpool who joined the Royal Air Force straight from grammar school in 1964 to become a cadet at Cranwell, then populated more by public school types. He desperately wanted to become a fighter pilot and he did.

This fascinating, frank memoir is an account of a remarkable career during the last part of the twentieth century as a fighter pilot and commander, concluding as an Air Marshal around the millennium. He managed to retain his passion for flying whilst climbing the promotion ladder, not that usual for those on the command career track.
Robin Olds that great American fighter pilot described them as … an attitude, cocky, competitve, aggressively pursuing excellence in the eyes of their peers with maybe just a touch of arrogance… You will find some of this in Chris Coville’s book but you will also read an honest account of these cold war times and a candid view of the very demanding aircraft he flew- the Lightning ,Phantom and Tornado F3 with 5, 43 and, in command, 111 Squadron.

You have to be a special person to be selected to fly in the RAF and more so to get to fly fast jets.
But Chris did this with an enthusiasm that is given to few through to his time as a very senior officer.
Luck ,was it luck, to be appointed station commander of RAF Coningsby, where he got checked out on the Battle of Britain Flight's Hurricane, Spitfire and astonishingly, the Lancaster and displayed these lovely aircraft. Need one say more of his true passion for flying?

The fierce social activities which were part and parcel of the fighter pilot world are frankly, selectively perhaps, recounted- a necessary accompaniment to what was and is an intrinsically dangerous daily business.
A subsequent promotion had him involved with the Red Arrows and of course he flew with them. But not just the heavy metal. He flew air cadets in Chipmunks no doubt passing on to them the enthusiasm he first experienced himself in that very first aircraft way back at RAF Woodvale.

His wife Irene must have had much up with which to put and she rightly features throughout the book-wives stories I guess, would make interesting books of their own!

His steady rise up the command chain was always accompanied by his determination to fly and fly and fly, and do so in any aircraft that he could lay his hands on ie a Mirage 2000.

It is an admirable story of a significant era in the history of the RAF and a great read!

A truly dramatic insight into the world of a RAF fighter pilot. From the high-jinks of a junior officer to the testing demands of high command, this is a wonderfully engaging and entertaining read.

As a fellow aviator I was looking forward to reading this book - and boy it didnt disappoint! An absolutely fantastic book, following the career of Chris Coville serving for nearly 40 years in the RAF.
Chris, a true old school fighter pilot, flew various aircraft during his career including the F-4 Phantom and the Spitfire!
Old school fighter pilots are legendary, as are their antics, and I can say Chris did the fighter pilot community proud, well done!
A truly superb book! If you want to know what it was like being a fighter pilot in the golden years (OK cold war years) then this book really will educate you and make you laugh all the way through.

This is a very enjoyable read for anyone interested in the UK military or specifically the Royal Air Force. Christopher Coville is a highly driven individual who achieved great success in his distinguished career despite his humble origins and what seems an insatiable appetite for risk. Of course, being a fighter pilot, risk is a constant companion but Colville’s repeated attempts to scupper his own career through high spirited antics, even despite his growing seniority, beggar belief! The recounting of such adventures make for a highly amusing read and demonstrate that the Authors skill at writing clearly match those he has in the cockpit.
RAF buffs will appreciate the detailed accounts of flying some of the classic fighter aircraft of the past 40 - 50 years as well as the insight into how the organisation does, or sometimes, does not work. The general reader will enjoy a very humorous journey of an individual striving to excel in an exacting and very competitive field. Like me, I hope they will be relived to see this can be achieved with a high degree of humanity and humility.

Born in Liverpool on 2 June 1945, CHRISTOPHER COVILLE joined the RAF straight from grammar school in 1964. Early in his career he flew Lightnings and Phantoms, before, amidst other postings and promotions, the Tornado F3. During his service he frequently flew with the Battle of Britain Memorial Flight and the Red Arrows. Promoted to air vice marshal, he became Air Officer Commanding Training Units in 1992, Assistant Chief of Defence Staff Operational Requirements (Air Systems) in 1994 and Deputy Commander-in-Chief, Allied Forces Central Europe in 1998. appointed a Knight Commander of the Order of the Bath in the 2000 New Years Honours, Sir Christopher retired from the RAF in 2003. 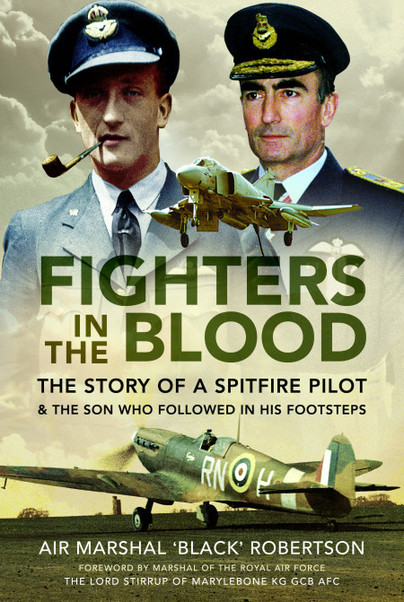 This is no ordinary memoir. Moving back and forth through time, two stories with fascinating parallels gradually unfold. One is of a Second World War Spitfire ace whose flying career came to a premature end when he was shot down and lost an eye, the other is about his progeny, a second generation fighter pilot who rose to the rank of air marshal. There were times when the lives of both father and son, ‘Robbie’ and ‘Black’ Robertson, hung in the balance – occasions when survival was simply a matter of luck. The narrative is unique in its use of two separate and distinct voices. The author’s…