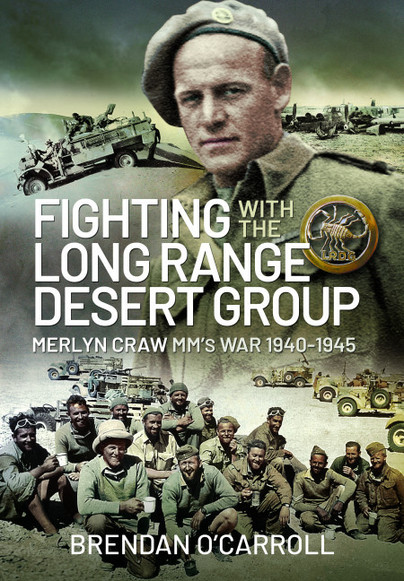 Add to Basket
Add to Wishlist
You'll be £20.00 closer to your next £10.00 credit when you purchase Fighting with the Long Range Desert Group. What's this?
+£4.50 UK Delivery or free UK delivery if order is over £35
(click here for international delivery rates)

Formed in 1940 the Long Range Desert Group was the first Allied Special Forces unit established to operate behind German and Italian lines in North Africa. Its officers and men were volunteers recruited from British and Commonwealth units. Merlyn Craw was serving with the 2nd New Zealand Expeditionary Force when he joined the LRDG in 1941. He took part in numerous missions in the desert. The navigational driving and fighting skills of the LRDG were legendary and they were frequently responsible for transporting Stirling’s SAS detachments on raids.

Merlyn’s luck ran out when he was captured on the Barce raid in September 1942, but he escaped twice, the second time making it back to Allied lines. Sent home on leave, he returned to Italy with the New Zealand Army. After a ‘disagreement’ he went AWOL and rejoined the LRDG with no questions asked, serving until the end of the war.

Drawing on interviews with Merlyn and other former LRDG veterans, the author has created a vivid picture of this exceptional and highly decorated fighting man. Readers cannot fail to be impressed by the courage and ruthless determination of Merlyn Craw MM and his comrades.

Brendan O’Carroll lives in Auckland, New Zealand and recently retired from the New Zealand Customs Service. With a long time interest in military history, the Long Range Desert Group has become his speciality. He has interviewed over 30 veterans while writing The Kiwi Scorpions: The Story of the New Zealanders in the LRDG (2000), Bearded Brigands (2002) and Barce Raid: The LRDG’s Most Daring Exploit in World War Two (2005). This book follows The LRDG in the Aegean (2020) and The Long Range Desert Group in Action 1940 -1943 (2020) under the Pen and Sword Military imprint. He has numerous other published works and articles to his credit. In 2006 his work was recognised by awards from the New Zealand Military Historical Society.