First Through The Clouds (Hardback)

The Autobiography of a Box-Kite Pioneer

Add to Basket
Add to Wishlist
You'll be £13.99 closer to your next £10.00 credit when you purchase First Through The Clouds. What's this?
+£4.50 UK Delivery or free UK delivery if order is over £35
(click here for international delivery rates)

The early years of aviation were marked by flimsy, unreliable machines and daring adventurous young men. One of the pioneer aviators leading the way in Britain was F. Warren Merriam who, following Louis Blériot’s first flight across the Channel in 1809, joined the Bristol and Colonial Aeroplane Company through which he obtained a Royal Aero Club’s aviator’s certificate.

Much of the flying training in those early days was a case of the blind leading the blind and, as Merriam wrote, ‘Flying was a dangerous business then. Aeroplanes were constantly breaking up in the air – let alone on take-off and landing; there were no parachutes and the pilots were ever expectant of mishaps.’ This was hardly the career for a decent young man and for a long time he had to keep his flying a secret from his parents.

Aviation did indeed develop into a career, with Merriam becoming a certified instructor at Brooklands aerodrome. There he taught many of the men who became pioneers in aviation and others who joined the Royal Flying Corps that crossed to France in the early months of the First World War.

The term pioneer could also be ascribed to Merriam for he was the first person in Britain to fly through the clouds. Until that day in 1912, it had been assumed that pilots would always stay within sight of the ground. Why would anyone want to go so high?

This entertaining autobiography takes the reader on a journey through Merriam’s early flying career, from how it started through his first ‘shaky’ solo, through a series of crashes into his First World War service. His account is the story of the early history of aviation, the development of aircraft and the personalities that led the way in those exciting, if risk-strewn days of yore.


It is a cracking good and easy read and a very modest autobiography of someone who achieved so much. He certainly deserved his AFC after WW2.

The Aviation Historian, Issue No. 34

Originally written in 1954 this is a memoir by one who, literally, saw the ups and downs from the earliest days of flying training.
It is a rare gem for the vintage aviation buffs and thanks should go to the Aviation Historian team for ensuring that the book is available once again.

This is really one of the classics of aviation literature. It is surprising that it has not been reprinted previously, while some other titles have seldom been out of print.

Originally published in 1954, a welcome new edition of the autobiographical memoirs of an early pilot from the pioneering days of aviation recalling his life as a flying instructor at Brooklands and his subsequent experiences during WW1 training pilots for the Royal Flying Corps (RFC) and Royal Naval Air Service (RNAS). Includes Foreword by Air Chief Marshal Sir Philip Joubert de la Ferte. 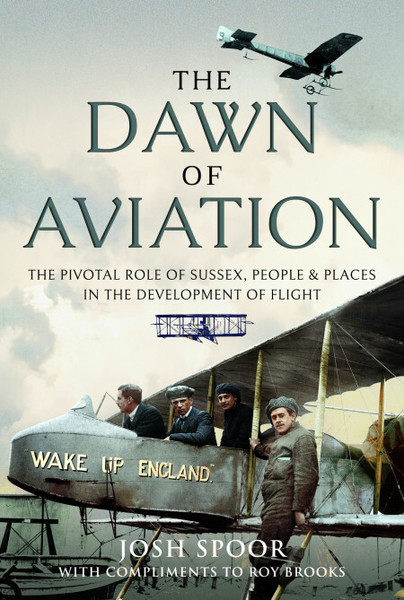 Shoreham airport, founded in 1910, is the oldest airport in the UK and the oldest purpose-built commercial airport in the world. Yet aviation began in Sussex far earlier, with balloonists making landfall at Kingsfold near Horsham in 1785. These early activities attracted much attention, with some 30,000 people gathering at Black Rock in Brighton, as well as on the surrounding hills, to watch the first balloon ascent from the town in July 1821 – using coal gas from the recently opened gas works. That particular balloonist, Charles Green, later became immortalised by Charles Dickens in his Sketches…