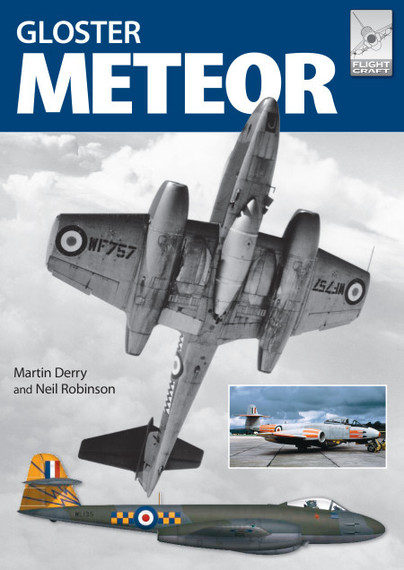 Click here for help on how to download our eBooks
Add to Basket
Add to Wishlist
You'll be £4.99 closer to your next £10.00 credit when you purchase Flight Craft 13: The Gloster Meteor in British Service. What's this?
Need a currency converter? Check XE.com for live rates

The Gloster F.9/40 was Britain’s first jet fighter and as the Meteor F.I became the first jet-powered aircraft of any description to enter service with the Allies in World War II. Several early Meteors were despatched to Europe in the hope that 1945 might witness the first ever jet-on-jet combats between it and the much-vaunted German jets – a contest which, in the event, was never to occur.

Post-war, and the Meteor quickly became the backbone of the UK’s day fighter defences, progressing through successive Marks as it did so, until finally being replaced on the front line by later types during the mid-1950s. With their ever-adaptable airframe, two-seat Meteors became Britain’s primary night fighter too, serving for several years until replaced by the Gloster Javelin from the late 1950s onwards.

With its operational career over, the Meteor’s adaptability and ruggedness was put to sterling use as an advanced trainer, the most obvious example of which was the T.7. As late as 1982, a handful of stalwarts were still soldiering on.

Although space precludes a comprehensive history of such a prolific aircraft, it is hoped that both aviation enthusiasts and aircraft modellers may find some interesting examples in these pages, and sufficient inspiration to help them choose which colour scheme to finish their latest Meteor model in.

This latest addition to the FlightCraft range follows our well-established format in that it is split into three primary sections. The first covers the Meteor using numerous photographs, informative captions and tables. The second is a 16-page full-colour illustration section featuring detailed profiles and 2-views of many of the colour schemes and markings carried by British Meteors. The final section lists as many injection-moulded plastic model kits of the Meteor, in all the major scales, that the authors could obtain, plus a gallery of models made by some of the UK’s best modellers.

I thoroughly enjoyed what was offered here and found some things very interesting and informative; the colour prints are a great mix with great reference value. The section covering available models is another very well presented aspect.

There is a treasure trove of images for scale modellers and the good news doesn’t stop there! The book covers the history and development of types used by the UK including Photo Reconnaissance, Night Fighters, Targets, Tugs and Royal Navy Meteors plus some of the more unusual configurations in the Miscellany section before moving on to the Camouflage and Markings section.

This section contains 22 pages of full colour art work that was specially commissioned for the book, there are the familiar side profile images along with some of the aircraft being shown from a second either topside or underside view, again a fantastic resource for the scale modeller.

This title - indeed, the FlightCraft series - treads the boundaries between being 'a book for the modeller' and 'one for the aviation historian'. And, to be fair, it does so deftly.

The artwork is inspiring, especially when considering the two-seat variants/night fighters. All-in-all, this is a fine reference for any Meteor fan, particularly those new to the type.

As a modeller myself, I found this to be a first class addition to the Flightcraft series and covering the important topic of the first jet to enter service with the RAF, before the end of WW2. Lots of detail information I didn't know before and also the inspiration to try some new models. At a very reasonable price, this should grab the attention of modellers and aviation historians alike.