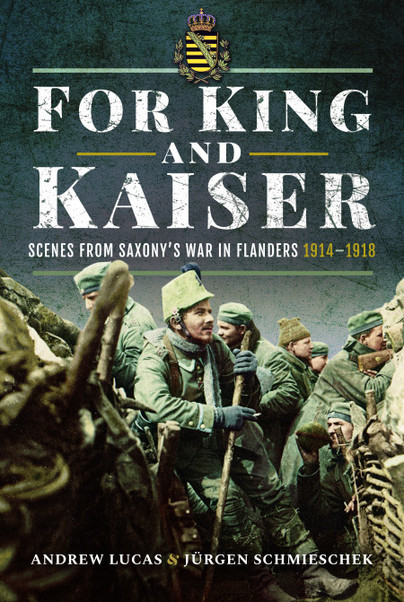 For King and Kaiser (Hardback)

Add to Basket
Add to Wishlist
You'll be £25.00 closer to your next £10.00 credit when you purchase For King and Kaiser. What's this?
+£4.50 UK Delivery or free UK delivery if order is over £35
(click here for international delivery rates)

Following on from their pioneering account of the Saxon army in the First World War –Fighting the Kaiser’s War – Andrew Lucas and Jürgen Schmieschek have compiled this remarkable sequel which covers Saxony’s war in Flanders in much greater detail. Once again they draw on vivid extracts from personal accounts and letters as well as regimental and documents from the Saxon archives, and they illustrate their powerful study with hundreds of previously unpublished personal photos which show every aspect of wartime experience in the front line and the rear areas.

The role of the Saxon army in the three battles of Ypres is recorded in graphic detail, and rare photographs offer fresh perspectives on famous wartime locations on the Western Front including Ploegsteert Wood, the Menin Road, Bellewaarde, Wytschaete and Passchendaele. The historic photographs – and the insights provided by the accompanying text – give us a fascinating inside view of the Saxon soldiers and their relations with the local population who were obliged to host them.

The quality of the evocative personal material – text and images – collected by Andrew Lucas and Jürgen Schmieschek makes this exceptional work a major contribution to the literature on the German forces on the Western Front.

The book leaves a deep sense of humanity at the end of the reading. Of an act of love by the two authors towards so many forgotten and confused soldiers in the mass, both in life but also in death. The last chapter is perhaps the most moving, that is the one that tells of the events of the cemeteries built during the war and then obliterated by the Allied advance and by the alternating events of the fighting. One cannot but think that so many Saxon lives have often been sacrificed for a gain of a few meters, or have been lost in the banality of death in the trenches. The last chapter therefore offers a sense of closure for former soldiers of the Royal Saxon Army, who died for loyalty to their King and the Kaiser. A book that cannot miss on the shelves of anyone who wants to know a little known aspect of the German Imperial Army.

I have really enjoyed this title as it bounces along at a pace and you find yourself wanting to go with it rather than being dragged. For those not into heavy reading this is an ideal offering covering the Great War as you read what you choose rather than every word as the writing style allows this without you feeling in the dark. The photographs will be the content that attracts most and I understand that, but I find myself drawn to the diary entries more and more as I progressed through the title. One word of warning there are some disturbing images of death and destruction that may offend. This is a truly stunning book that provides everything I could want from such a title and more again.

Any book that further witting and unwitting testimony about the German troops who manned the Western Front lines is a welcome addition to the library of work on the Great War. Some fascinating insights.

This was a really good in that it is very well written and explained, in fact excellent for the newbie to the subject. A really good read and gets a 4.5 stars from me.

This fantastic book is not just a written history of Saxon Army, but it is therefore a visual history. The images throughout this book are remarkable at all level; the value of which is clear to see for anyone interested in the Flanders battlefields.  Further special images who battlefield graves such as near Broodseinde, or cemeteries that were established north and east of Lille in late 1914.    Of particular fascination were the photos of the different groupings of soldiers, with helmets and rifles which further brought home the personal aspect of war, and the youth embroiled in it. The images are to clear, and - in there own way- inspiring.

This book is truly excellent. As a battle guide, I am happy spending hours walking the battlefields endeavouring to understand the nuances of geography and history in order to fully understand what happened. This book delivers the German / Saxon view of the ground and brings alive the world as they saw it. Essentially of course it was little different to that experienced by their British opponents. The images are excellent and really focussed on the men mentioned in the narrative. The maps and sketches are invaluable in understanding the ground and the authors have taken the trouble to identify locations and landmarks by both their German and British names, thereby making correlation of accounts much easier. Very highly recommended. 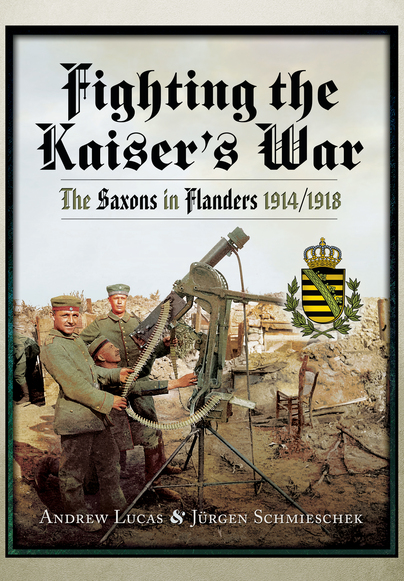 Personal accounts of the Great War experiences of British soldiers are well known and plentiful, but similar accounts from the German side of no man's land are rare. This highly original book vividly describes the wartime lives and ultimate fates of ten Saxon soldiers facing the British in Flanders, revealed through their intimate diaries and correspondence. The stories of these men, from front-line trench fighters to a brigade commander, are in turn used to illustrate the wider story of thousands more who fought and died in Flanders 'for King and Country, Kaiser and Reich' with the Royal Saxon…