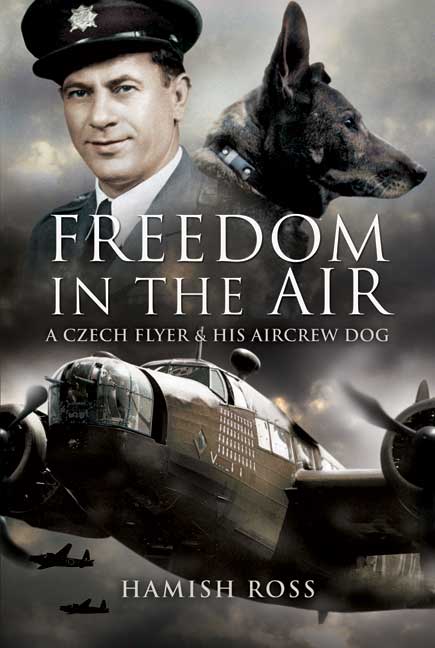 Freedom in the Air (Kindle)

A Czech Flyer and his Aircrew Dog

Click here for help on how to download our eBooks
Add to Basket
Add to Wishlist
You'll be £4.99 closer to your next £10.00 credit when you purchase Freedom in the Air. What's this?
Need a currency converter? Check XE.com for live rates

This biography tells of the life of a Czech airman who escapes from the Nazi invasion, fights with the French and finally arrives in Britain to fly as an air-gunner with the RAF during WWII. He returns to his homeland after WWII but escapes back to the UK again when the communists gained control. Again he joins the RAF and rose to the rank of WO.

The unique part of this is that from his time in France, throughout WWII and until half way through his second tour with the RAF he was inseparable from his Alsatian dog, an animal that became famous and was awarded a dog equivalent to the VC. The animal flew with his owner on many bomber raids, became the squadron mascot and was officially a serving RAF dog. It played an amazing part in the second escape from the Czech communists regime when the author was lucky to make it over the border to the US zone in Germany.

'This is a very human story against the back drop of war and it will appeal to a very wide readership because it covers several strong stories beyond the direct boundaries of air warfare. The author has made a very good job of presenting the story in all its unusual facets. It is difficult to pull out any single facet for comment because it is a story that binds the threads together, but readers will find the story particularly interesting in recording Bozdech’s return to the new Czech Air Force, the events resulting from the communist take-over, and his second escape with Antis to return once more to the RAF. This is something that has received almost no attention before.'

This is an unusual book and not precisely what you might expect from the title. It is not about the freedom that a pilot might gain from flying, for the subject of this true story was not a pilot; he was an air gunner and the freedom was one of release from the tyranny of his homeland and the opportunity to fight for the moral and political values of the west.

Vaclav Robert Bozdech was a captain in the Czechoslovak Air Force. He made his way to Britain to become one of 3,500 Czech and Slovak airmen who served with the RAF in WW2.... The main hero of the book is not Bozdech himself, but his Alsatian, Antis. Man and dog had an exceptionally strong bonding and, following lengthy negotiations with bureaucracy, Antis was given official authority to fly on operations as aircrew...

... This book makes clear the extent of wartime and post-war suffering endured by Czechs and others fulfilling their roles in the overall search for freedom.

He was the most wonderful, staunch, courageous dog and the love between him and his master is truly awesome. And I defy anybody not to be moved by this story.

The author Hamish Ross has used interviews, private papers, archive material and Bozdech’s own writings to craft an inspiring story. It deals with a little known aspect of the war, the Czechoslovakian contribution to the RAF, and weaves together the events in Czechoslovakia alongside the moving story of one man’s relationship with a very special animal. The timeless themes of loyalty, separation, and ultimately, loss, are dealt with in a dignified and sincere manner without undue sentimentalism. Nonetheless, although Bozdech’s life, and the events in Czechoslovakia, are interesting, the star is most definitely Antis.

Sqn Ldr Paul Scott for Spirit of the Air