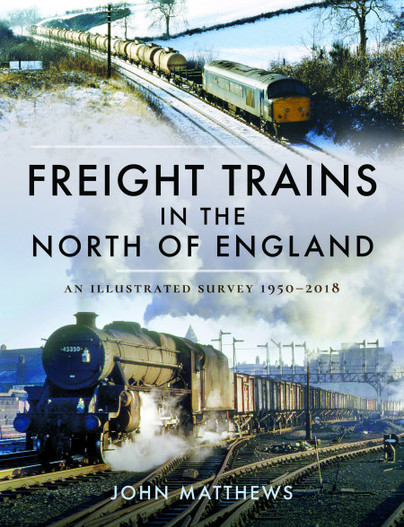 Freight Trains in the North of England (Hardback)

Add to Basket
Add to Wishlist
You'll be £17.50 closer to your next £10.00 credit when you purchase Freight Trains in the North of England. What's this?
+£4.50 UK Delivery or free UK delivery if order is over £35
(click here for international delivery rates)

We all remember the famous trains of yesteryear like ‘The Flying Scotsman’, ‘The Royal Scot’ and ‘The Waverley’, passenger trains from the great days of steam, but behind the glamour of these celebrated expresses were the dirty unloved goods trains. Well into the 1980s it was possible to ride behind and experience most locomotives on passenger services, but the arrival of the HST and diesel multiple units soon changed this, and with the odd exception, today’s locos can only be found working on freight trains. The interest in the goods or freight train has risen greatly in recent years even against a backdrop of reduced depots, yards and variety of workings. This book brings together the work of many of our most outstanding railway photographers featuring some of their best work from the mid 1950s right up to the present day. The old local trip with its wooden trucks, the long mixed goods, the heavy steel train and Speedlink services all feature from the steam, diesel and electric eras. Put these trains into picturesque Northern landscapes or set them against almost forgotten industrial backdrops and we hopefully have a book that captures the ‘Freight Train in the North of England’

This book is a collection of photographs all with a detailed caption to give the reader all the needed information.
The introduction explains that whereas we all are very familiar with the many named expresses and glamorous trains of yesteryear, we were possibly less interested in, or did not all take time to look into the very many interesting freight trains that ran in the North of England - the local trip workings, the long, mixed goods trains and so on. Various transition periods, such as Speedlink, are well documented throughout the book.
All in all, I found this book to be excellent. The vast majority of the photographs are most interesting and indeed of excellent quality. Both black & white and colour images feature throughout.
The book looks at different areas such as West Yorkshire, Cumbria, Durham and so on. The only slight criticism I have is the inclusion of Derbyshire and Nottinghamshire for some bizarre reason! They were Midlands when I went to school! Anyway, we begin in Nottingham and work our way north, finishing in Carlisle.
I found the quality of the printed images to be infinitely superior the last book I reviewed. The images are fantastic throughout the book and show chronologically the freight trains to be found in each area.

This is a photograph album, with the only text, apart from the captions, being a two-page introduction. Those captions are very good, for the most part describing the originating point of the train, its destination and the traffic involved.

The photographs, by photographers both well known and not, are very good too. Laid out in the book by geographical location, the photographs were taken in places ranging from Nottinghamshire northwards to the border with Scotland. Many are in colour, including some of steam-hauled trains and green-liveried diesels. In photographs taken from 1965 onwards, even BR Rail Blue does not appear as dreary as I recall it...

The time period covered is as described in the book’s sub-title: 1955 - 2018. This period is an interesting one. In the photographs we see: steam traction replaced by diesel and electric locomotives; small two-axle wagons replaced by large bogie wagons; wagonload traffic replaced by trainload, a State-owned railway replaced by private companies. We also see, sadly, the relentless loss of lineside infrastructure.

After long days at work, of an evening I thoroughly enjoyed working through this book photograph by photograph. My favourites? A couple of taken of first generation diesels hauling freight trains through Grangetown past an extraordinary landscape of steel, steam and smoke.

This photographic reference covers a wide area and timespan for the north of England, from Nottinghamshire to the North East and the North West and Cumbria. The collection of photos is varied, with plenty of interest across the different areas along with some unusual items, such as the Harton Electric Railway featured. Members who are not a fan of steam will find there are a reasonable number of photos of them, but diesels outweigh them overall and it doesn’t spoil the good photos throughout. A good reference collection for members interested in freight operations across the north of England.

In summary, the book provides a very pleasant visual journey through several decades of Britain’s rail freight history, from the days of loose-coupled coal traffic, through the eras of Freightliner and Speedlink, to near-current times with freight flows of the 21st Century.

Readers cannot complain that this title fails to do ‘what it says on the box’, for within its 140 or so pages we find more than 200 fine images of steam, diesel and electric traction on freight workings in all parts of England north of the Nottinghamshire/Derbyshire area, all arranged geographically and featuring the work of the author and several accomplished photographers. With black and white and colour images, there is something for everyone, whether it be a fine colour view of Hatfield Main Colliery fronted by double-headed class 31s and 37s hauling mineral wagons and oil tanks or a well-composed shot of a Black 5 on a mixed freight about to be passed by a Britannia at Burton and Holme in Cumbria.

A high proportion of the views are taken in bright sunshine showing pinpoint detail, and where this is not the case the images the images remain clear, with some having a moody artistic quality which more than justifies their inclusion.

PRODUCT OF THE MONTH

An excellent effort from the author and the publisher – easily recommended.

I must confess that I am usually overawed by the hundreds of titles of railway books that I see on the shelves of bookshops.

It is not only the sheer quantity of such books, but also that the titles and subject matter tend to presume much existing knowledge on the potential reader’s part.

The text tends to be less appealing than the historic photographs, often being either dry and factual or over-emotional and, potentially, written with rose-tinted varifocal lenses!

John Matthews’ new book is, fortunately, not in that category. For such a comprehensive and detailed survey, Freight Trains in the North of England is an enjoyable reading and browsing experience.

The final book on freight trains in the UK. Although the photographs only encompass the northern part of England, they are so good and the railway landscapes and branches they show are so picturesque that they allow them to get to know them better. Some of his 200 photographs could be considered the best photographs of freight trains that have been published so far.

Author article: ‘Enthusiast’s love affair with a lifeblood of the north’ as featured by

The Clitheroe Advertiser and Times and Burnley Express

Author article: ‘Love affair with a lifeblood of the north’ as featured by

John Matthews was born at Preston Royal Infirmary in September 1951 and grew up in a terraced street devoid of a single car! He left school at sixteen with the achievement of two GCE ‘O’ levels in English and Mathematics and a job working in Lloyds bank at Southport followed. He is now a widower after the sad loss of his wife Sharon four years ago. He has two sons and two grandsons of whom he is very proud. He has adopted a snow leopard and other interests include watercolour painting and cricket.