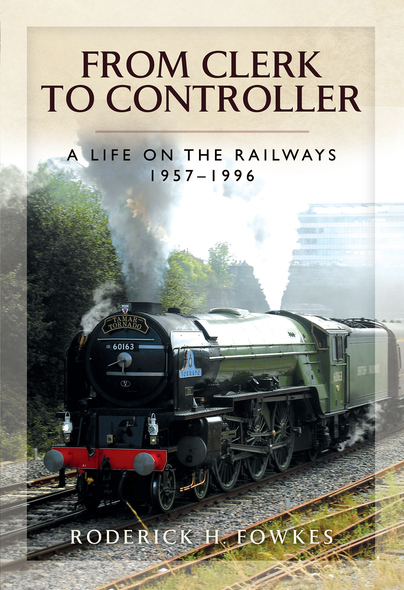 From Clerk to Controller (Hardback)

You'll be £25.00 closer to your next £10.00 credit when you purchase From Clerk to Controller. What's this?
+£4.50 UK Delivery or free UK delivery if order is over £35
(click here for international delivery rates)

‘Like so many other boys of my generation, I wanted to be an engine driver; my dreams, however, were dashed in 1956 when I went for a medical at Derby. So much depended upon having perfect eyesight ...’ So wrote the author in his introduction in Last Days of Steam on the LMS & BR, published in 2009. Now featuring all new colour photographs, From Clerk to Controller is an account of Roderick H. Fowkes’ service on the railway, from 1966 until his retirement in 1996.

Reflecting on the demise of steam in the 1960s, and revisiting the author’s experiences in Trent in 1957, the compelling story continues with ‘some of the best times of a thirty-nine year career with BR’, including Fowkes’ years working in Control and the fulfilment of his lifetime ambition of moving to the West Country.

Filled with personal and memorable anecdotes, this book continues the extraordinary tale of the thirty-nine year British Railways career of a man deemed unsuitable for the footplate grade in 1957.

A valuable book shedding light on unpublicised aspects of railway operation. The author began as a junior porter at Trent station, and worked his way up via Control at Nottingham, Toton Marshalling Yard, Movements Supervisor at Laira, Duty Manager at Plymouth and back to Laira.

'This book blends an insightful portrayal of the demands of running a railway delivered on a personal level... Through the author we appreciate the highs and lows of a successful career.'

From Clerk to Controller

'This book blends an insightful portrayal of the demands of running a railway delivered on a personal level... Through the author we appreciate the highs and lows of a successful career, and see a side of the railways that its passengers have little perception of...Liberally illustrated, this book offers the enthusiast a detailed insight into the workings of a major diesel depot, while also chronicling the author's fulfilling career.'

Liberally illustrated, this book offers the enthusiast a detailed insight into the workings of a major diesel depot, while also chronicling the author's fulfilling career.

Several books recounting the careers of various railwaymen have appeared in the past few years, and this is one of the best.