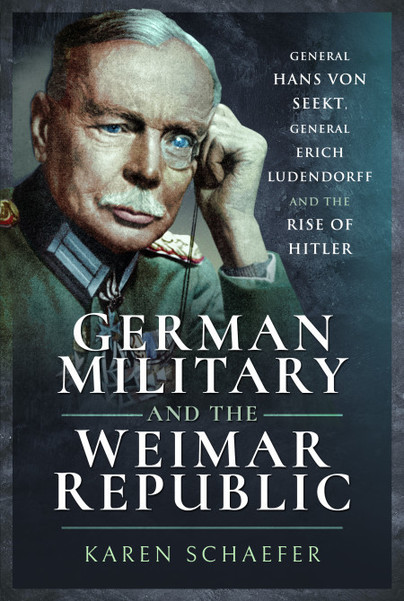 Add to Basket
Add to Wishlist
You'll be £25.00 closer to your next £10.00 credit when you purchase German Military and the Weimar Republic. What's this?
+£4.50 UK Delivery or free UK delivery if order is over £40
(click here for international delivery rates)

General Hans von Seekt (1866-1936) was the military counterpart of the Weimar Republic, both attempted to restore Germany's international acceptance and security following defeat in World War I and the Treaty of Versailles of 1919. And the failure of both led eventually to the rise of Hitler and Nazi Germany. Hans von Seekt was from the traditional German officer caste, served with distinction on the war and became Chief of the Army Command at the Reichewehr Ministry of the Weimar Republic and Germany's 'supreme soldier'and major military strategist. His role was to re-build the shattered German army in face of the punitive terms of post-war settlement imposed by the victorious Entente Powers which drastically reduced its strength and imposed crippling financial conditions. He aimed to build a modern and efficient military – a new German army – with a main strategy of peaceful defence purposes, and to re-introduce Germany into the community of nations. This original and far-sighted policy was opposed by the movement seeking revenge for defeat - a 'stab in the back' - led principally by his rival, General Erich Ludendorff, whose aim was re-build the once-mighty German imperial army as a major international force. The failure of von Seekt's experiment was mirrored by the fall of the Weimar Republic, and the rise of rise of Hitler and Nazi Germany.

The unification of Germany was to destabilize European affairs in the late Nineteenth Century, making WWI inevitable and sowing the seeds for WWII. The author provides a very competent review of the way in which Germany responded to its defeat in WWI and how that presented the opportunities for Hitler and the NSDP to come to power, creating the inevitability of a new and terrible war – Very Highly Recommended

I’m going to say that I learnt a lot from this book particularly about Hans Von Seekt, Ludendorff and the Weimar Republic, but I’m going to say you best knowing a bit about the subject first, mainly because it can be confusing for the beginner and it was a generally a confusing time especially when you consider how many governments there were in the 1920’s. The book does feel very academic and formal, but it is still an excellent read, it has an excellent number of conclusions and the author Karen Schaefer has done a great job indeed, she has clearly looked into this subject deeply. The notes section and the bibliography at the back of the book is very good indeed and comprehensive, certainly plenty if you would like to take your reading forward. An excellent book, well worth the read but might not be for everyone. 4 stars out of 5.

An important book worth reading for students of the Weimar Republic.

The origins of this book as a thesis tends to make the reading of it hard work but it is actually well worth it.
At its centre is the struggle in the post war Reichswehr under the Weimar Republic for the soul of its Army. Von Seekt was determined to disengage from the pre-war elevated position of the Army as an active partner within the Imperial leadership, to something related to Clausewitz’s principles as the Army as an instrument of the political state. The clarity of his thinking in such difficult post war conditions was brave to the extent that he foresaw the problem of soldiers and officers promoting political allegiances and therefore the need for the Army to be politically neutral. He also recognised the difficulties that the Treaty of Versailles imposed on German military competence and looked for ways beyond the treaty to develop a small but well-armed and equipped professional army based on the principles of manoeuvre that could become the core of a conscripted army if circumstances demanded. By the time he retired in 1926 he had succeeded in his objective in laying the foundation of the Reichswehr but recognised that some of his junior officers who were to later become eminent, retained regressive views. His philosophy that the Army must be subservient to the State was valid for a balanced democracy. However, it failed as increasingly the German voters supported extremist parties and of course eventually the NSDAP gained power through the ballot box. At that point the Clausewitz theories that Von Seekt promoted, positioned the Reichswehr as a tool of the civilian government, and the rest we know.

Karen Schaefer is an historian specialising in German military history during and after the First World War. She is leading librarian and archivist for the Bundeswehr - Federal Germany Army - and obtained her PhD at the University of Potsdam. Her thesis, which forms the basis of the book, was supervised by Professor Beatrice Heuser of the University of Glasgow who also advised on the revision to book form.