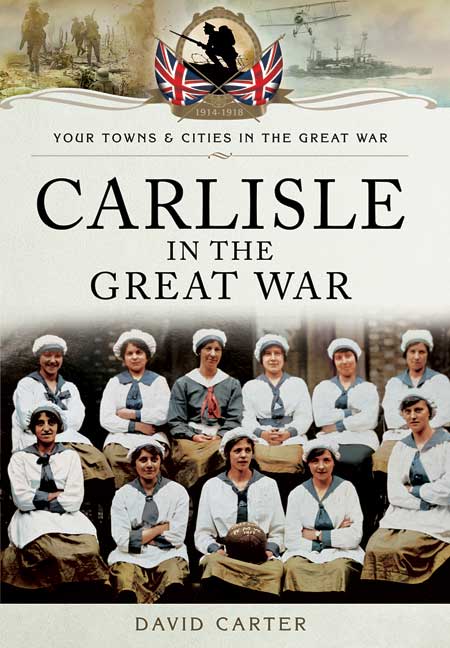 Carlisle in the Great War (ePub)

Click here for help on how to download our eBooks
Add to Basket
Add to Wishlist
You'll be £4.99 closer to your next £10.00 credit when you purchase Carlisle in the Great War. What's this?
Need a currency converter? Check XE.com for live rates

How the experience of war impacted on the town, from the initial enthusiasm for sorting out the German kaiser in time for Christmas 1914, to the gradual realization of the enormity of human sacrifice the families of Carlisle were committed to as the war stretched out over the next four years. A record of the growing disillusion of the people, their tragedies and hardships and a determination to see it through.

Already an important railway junction, with local industrial and commercial interests reflecting its historical position on the border with Scotland, Carlisle became a key settlement in the Great War.

The Carlisle story includes the arrival of Belgian Refugees; the care of wounded men passing through the city on hospital trains; recruiting the Lonsdale Battalion; dealing with the aftermath of the Gretna rail disaster; caring for the wounded brought to the local hospitals after major battles; the effect of the Gretna Munitions factory on the city and state ownership of public houses and breweries. Beneath these new activities normal life continued with children going to school, local government dealing with a growing population and daily work and commerce.

As seen in Cumbria Life Magazine.

Belgian refugees, hospital trains, the Lonsdale Regiment training in the Castle, the Quintinshill rail disaster, the Gretna Munitions Factory and on top of it all the nationalisation of the pubs. Carlisle was as far removed as possible in England from the trenches of France, but, like everywhere else, it was fully engaged in the war effort.

As seen in The Cumberland News.