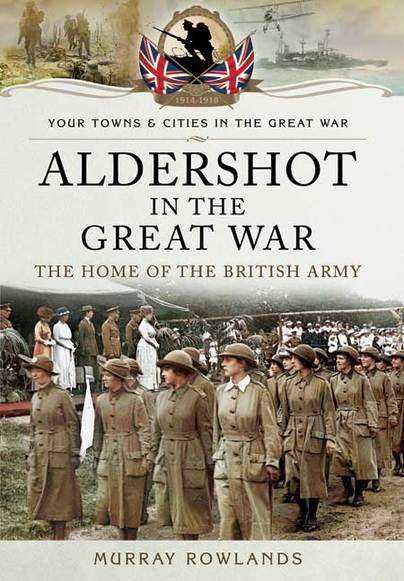 Aldershot in the Great War (ePub)

Click here for help on how to download our eBooks
Add to Basket
Add to Wishlist
You'll be £4.99 closer to your next £10.00 credit when you purchase Aldershot in the Great War. What's this?
Need a currency converter? Check XE.com for live rates

Until now, no history has ever been written about the importance of Aldershot during the Great War, even though it occupied a pivotal position in the Allied powers' conduct of the war. Under the Defence of the Realm Act there was an absolute freeze on any communication of information about what was happening in the town at the time. However, drawing on rare and sparse information from Aldershot News, Murray Rowlands has successfully pieced together the remarkable history of the town with this book, that includes a first-published record of the troops in Aldershot on 4 August 1914 and a detailed look at Aldershot as a premier training base through the eyes of Anthony Eden, Wilfred Owen and men of all ranks.

Despite its role as a military base, a thorough list of the names of Aldershot's fallen has never existed, as reflected by the lack of names on the town's war memorial. Every effort has been made to produce a reliable list of the brave local men who were tragically killed in action. As well as this, the book traces the development of aircraft manufacture at nearby Farnborough under the guidance of Mervyn O'Gorman, the local activities of crucial wartime figures, such as Smith-Dorrien, Haig and French, and the changes in the social fabric of the area between 1914-18.

Aldershot in the Great War is an invaluable and timely exploration of a town that has received little recognition for its immense contribution to the war effort.

The first book written about Britain's premier army base in the First World War.

A new book by Camberley historian Murray Rowlands reflects not only on Aldershot's role in the First World War, but how the town came to be in the first place. 'Aldershot in the Great War' displays records of the troops in Aldershot in August 1914 and is a detailed look at the town's role as a training base.

As featured in Tribune Magazine.

As seen in the Aldershot News & Mail.