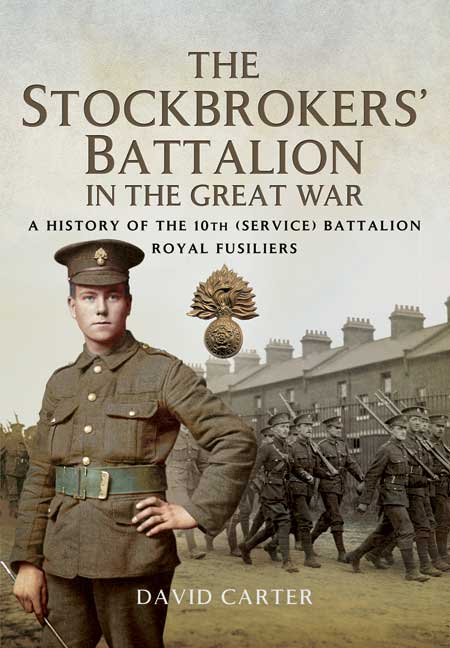 The Stockbrokers' Battalion in the Great War (Hardback)

A History of the 10th (Service) Battalion, Royal Fusiliers

Add to Basket
Add to Wishlist
You'll be £25.00 closer to your next £10.00 credit when you purchase The Stockbrokers' Battalion in the Great War. What's this?
+£4.50 UK Delivery or free UK delivery if order is over £35
(click here for international delivery rates)

10th (Stockbrokers') Battalion, Royal Fusiliers can genuinely claim to be the first of the many Great War Pals Battalion and this overdue book records its distinguished contribution in text and contemporary images.

The Battalion initially recruited young men from the Stock Exchange and City firms. Many could have applied for commissions but were reluctant to spend the time necessary for training. Members of the Stock Exchange from well-known families, like Rothschild and Rubens, served in the ranks alongside clerks from insurance, shipping and banks. The City connection was strengthened when the Lord Mayor, Sir Vansittart Bowater, was made Honorary Colonel in 1914. City Livery companies gave money to provide weapons as well as instruments for the Band.

The Battalion served in France and Belgium from July 1915 until March 1919. They were in action on the Somme and at Ypres. After facing the 1918 German Spring Offensive, they participated in the pursuit of the German Army back through France before ending the war at Charleroi.

Particularly poignant are the words of Battalion members from when it was formed in London in August 1914 until the end of the War. Many come from personal diaries and letters written at the time but the author also uses the War Diary of the Battalion and accounts of events written by participants after the War.

The publication of this superbly researched and readable book appropriately coincides with the Centenary of the Battalion's formation and comes at a time when interest in The Great War has never been greater.


David Carter has done a fastidious job in assembling the narrative of this Battalion, which is well illustrated with scarce images.
This volume serves to fill a gap in the literature and takes the detailed study of the Pals a step further in this valuable series.

Society of the Friends of the National Army Museum

...the many excellent contemporary records which the author has brought together so carefully, provide us with an excellent and readable record of a neglected unit.

This outstanding book tells the story of this unit via the letters, diaries and other written contemporary accounts. It uses their words to tell their very interesting story. It is a superbly written account and is a long overdue volume on this Pals battalion. It has been published at am appropriate time as the centenary of the outbreak of the Great War is upon us.

I have no hesitation to recommend this excellent book.

The author has done a good job in researching and drawing content from letters and diaries to produce an account that is poignant and uplifting. He has also shown how those left behind in London took special interest in 'their' battalion and how livery companies gave money to buy weapons and also instruments for the band... It was a very close family and every loss was deeply felt.

A meticulously researched and well-written book. The use of extracts from soldiers’ letters home and the Battalion Diary bring this excellent book to life.