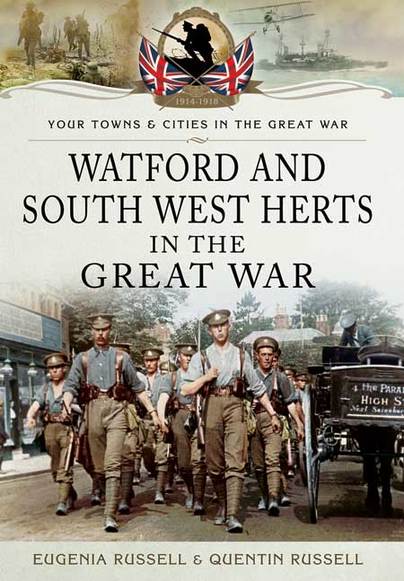 Add to Basket
Add to Wishlist
You'll be £12.99 closer to your next £10.00 credit when you purchase Watford & South West Herts in the Great War. What's this?
+£4.50 UK Delivery or free UK delivery if order is over £35
(click here for international delivery rates)

This book highlights the importance of Watford as a regional centre within South West Herts during the years of the Great War as well as the cohesion of the local area and the impact events and initiatives had on the entire region. The organization and presence of the Army are discussed before focusing on different aspects of civilian life such as the contribution of civilians to the war effort, the Police and Fire Service, the role of Churches, Schools and the Press and changes in employment and local businesses. As the War wore on and the magnitude of the sacrifice sunk in, hospitals and charities became more prominent. The latter part of the book presents these as well as the many public and private ways of commemorating the War Dead in the aftermath of the conflict. The distinctiveness of such Memorials reflects the legacy of the Arts and Crafts Movement and the artistic communities resident in Bushey and Watford.