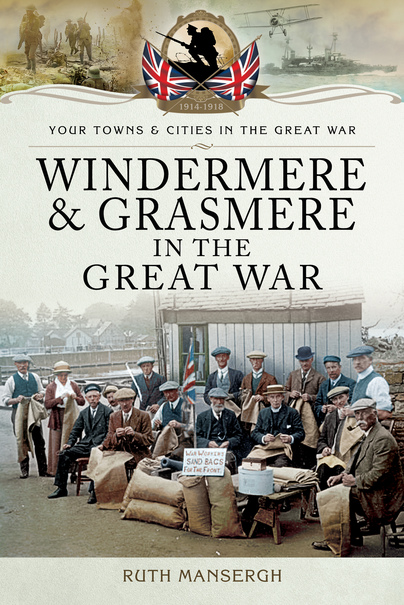 Windermere and Grasmere in the Great War (ePub)

Click here for help on how to download our eBooks
Add to Basket
Add to Wishlist
You'll be £4.99 closer to your next £10.00 credit when you purchase Windermere and Grasmere in the Great War. What's this?
Need a currency converter? Check XE.com for live rates

Windermere and Grasmere in the Great War is an expert account of these Lake District communities' fascinating contributions to the Great War effort from the outbreak of war in 1914, to the long-awaited Allied victory in 1918. The book is designed to be accessible to all, and for this reason it includes the history of the South Lakes area of Cumbria, where the scarcity of visitors was felt during the Great War. Interesting stories include Lake Windermere’s setting as a watery runway, rumours that a German airship was operating from a secret base near Grasmere, the double life of Arthur Ransome, and Cumberland Wrestling’s post-war boom. The book also takes a detailed look at the graduates of the Lakes Flying Company, the Hardistys, VAD nurse Nellie Taylor, the Baisbrowns, the boatmen who sewed bags for sand, the gunpowder carts, Beatrix Potter’s opinions, conscientious objectors, landowners and gentry, Cobby the horse, railwaymen, and prisoner of war Frederick Mallinson. It acts as a reference guide to local war memorials, and a chronological guide to Belgian refugees in south Lakeland whose homes included Ellerthwaite Lodge, Windermere, Calgarth Park auxiliary hospital, Troutbeck Bridge, and the village of Finsthwaite. St Martin’s next to the Old England Hotel, Windermere, has more memorials than any other church in Cumbria – including the Cathedral (Carlisle). Overall, this is a poignant testimony to the bravery, self-sacrifice and determination of the people of Windermere and Grasmere during the Great War, who sought to find normality in a reality so far removed from anything they had ever known.

This book, with its attractive cover and large number of good quality photographs will most likely appeal to anyone who has a relative mentioned in it, and there will be many!

One of the best in the series.

This series is totally riveting, essential reading for anyone who lived there, and for anyone, indeed, who wants a complete picture of how the conflict affected the people of this country. Superb.