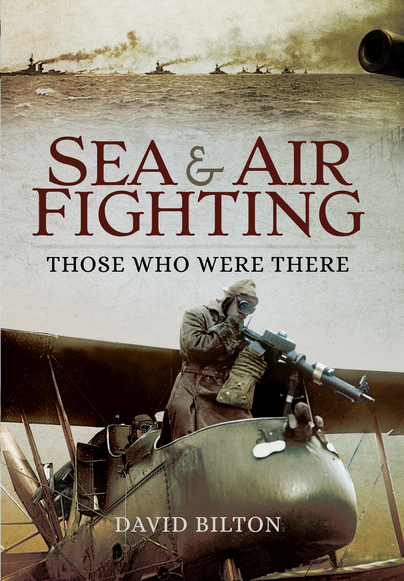 Add to Basket
Add to Wishlist
You'll be £6.50 closer to your next £10.00 credit when you purchase Sea and Air Fighting. What's this?
+£4.50 UK Delivery or free UK delivery if order is over £35
(click here for international delivery rates)

This is a compelling book for lovers of sea and air stories from the Great War era. In the twelve stories told by the participants, many of whom were decorated for bravery, they describe their experiences of events: stories of luck, tenacity, courage, extreme danger, excitement and bravery. Also included are photographs to help set the scene for the vignettes and details of the authors' lives where possible. Seven stories detail the war at sea, while the other six reflect the war in the air from a civilian and combatant point of view.

The exciting thing about the stories, apart from their freshness, is that they have remained unpublished for nearly eighty years and they are written by participants who describe exactly what they experienced and felt. Mrs Peel describes what an air raid was like from a civilian’s point of view, and pilots describe both the humdrumness of some of their work and how it could suddenly change in to a fight for their life, in which luck often played a part in their survival. At sea, the authors describe the struggle to overcome the U-boat menace using Q ships and reveal the boredom, suspense and danger involved in laying a trap.

The Battle of Jutland is described from an officer’s active view of events, and the sinking of the Audacious is described by someone who was aboard and sworn to silence about the events. There is also the exciting story of the chase and fight between the Carmania and the Cap Trafalgar.

The ultimate test of any book—is it worth reading? The answer is yes. Since the veterans of the First World War have all passed away, their memoirs help remind us of that ghastly conflict. As an anthology, this book can be picked up on the spur of the moment, dipped into at any chapter and enjoyed. It is also suitable reading for a rainy afternoon or evening. Thanks to Bilton’s republication of these memoirs, we are not only reminded of the horrors of war, but the courage so frequently shown by its combatants.

A good read, to help us to realise what war can be like – it would make a good present for a young hopeful, set on joining the Navy. It may be of events 100 years ago, but they show the spirit of fighting men, of whatever era.

WWI history has been dominated by the trench warfare that was a result of the machine gun. The real innovation was in the air and at sea. A very well chosen photo-plate section supports the
recollections of those that were there – Excellent and great reading.