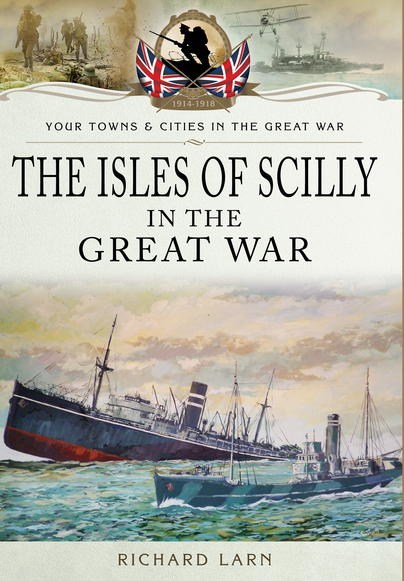 The Isles of Scilly in the Great War (Paperback)

Add to Basket
Add to Wishlist
You'll be £12.99 closer to your next £10.00 credit when you purchase The Isles of Scilly in the Great War. What's this?
+£4.50 UK Delivery or free UK delivery if order is over £35
(click here for international delivery rates)

The Isles of Scilly, five inhabited islands 24 miles west of Lands End, were of low priority to the War Department when the First World War was declared. With no manufacturing capability, no industry other than flower growing and agriculture, no electricity or gas, no mains water supply, no wireless station, and a population of only 2,000, the islands did have one feature in their favour their location. Sitting at the cross roads of six major shipping routes, Scilly had been a recognised ship-park since 1300AD, where sailing ships anchored to safetly awaiting a suitable wind, to re-victual, pick up water or effect repairs. The Admiralty sought to make it a harbour for the Channel Fleet in the mid-1800s, and in 1903 spent 25,000 defending the islands with 6-inch gun batteries, only to take them away seven years later.

When, in 1915, German U-boats moved from the North Sea into the Western Approaches, sinking large numbers of merchant vessels, Scilly was chosen to become a Royal Navy Auxiliary Patrol Station, and over time was sent 20 armed trawlers and drifters as escorts, mine-sweepers, mine-layers or anti-submarine vessels, along with 500 Royal Navy personnel. In 1917 Tresco Island became a Royal Naval Air Station, with 14 flying boats and over 1,000 personnel. The islands were suddenly at the forefront of the submarine war.

This book details Scilly's contribution to the war effort, with attention to its civilian population, the heartbreak of losing forty-five of its sons, and the trauma of countless seamen rescued from torpedoed ships.

Larn is to be congratulated in providing a compelling template of local wartime history that can be more generally applied as a growing number of scholars seek out this hitherto largely neglected corner of social history.

The book successfully reflects day to day life for the Islanders during the war. It puts on record both successes and disasters by naval trawlers and the flying boats that were all part of daily life.
One flying boat H-12 successfully sank UC-66, a mine-layer submarine with bombs making it the world's first submarine sinking by an aircraft.

Richard Larn can be congratulated on his research, and filling an important gap in WW1 history.

A small but well-formed work of essentially local coverage which is considerably more significant than its small size and limited geographical scope might indicated.

Richard Larn does a great job in describing the impact of the war on the island community, including the inevitable tensions of having so many service personnel stationed there and the responses to the many merchant vessel casualties in the area. Supported by some excellent photographs and first-hand accounts, the book also has a poignant conclusion.

I really know very little about the Isles of Scilly other than that Harold Wilson once holidayed there whilst he was Prime Minister (I thnk), and that Elineor Brent Dyer relocated her Chalet School during the war years - or was that the Channel Islands? In any case, this is a stark reminder of how important these islands were at the outset of what was to become the world's first global war. Some brilliant illustrations and a remarkable narrative that informs and educates us all. Superb.

Richard Larn OBE and Cornish Bard has earned a living from the sea since joining the naval training ship Mercury in 1944. Four years merchant navy as a cadet deck officer was followed by twenty-two years in the Royal Navy, including during the Korean War as a Chief Petty Officer Mechanician/Diver. Founder and MD of Prodive Ltd in Falmouth Docks, author of some fifty-eight non-fiction maritime books, shipwreck expert and now President of International Maritime Archaeological & Shipwreck Society, Richard lives with his wife, Bridget, on the Isles of Scilly.