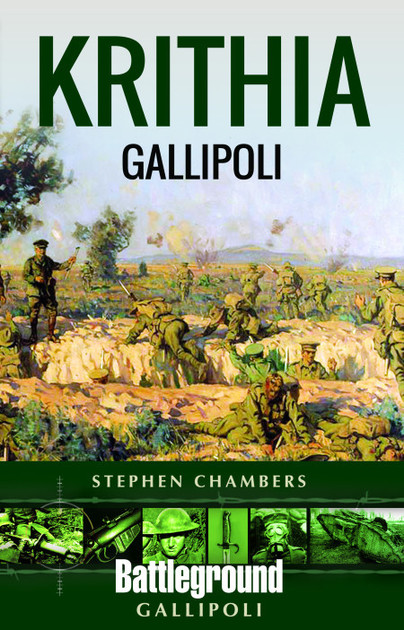 Click here for help on how to download our eBooks
Add to Basket
Add to Wishlist
You'll be £4.99 closer to your next £10.00 credit when you purchase Krithia. What's this?
Need a currency converter? Check XE.com for live rates

Krithia was a key objective in the land offensives; a killing ground greater than Anzac or Suvla. This book adds to the Gallipoli story and the preceding Battleground books on that campaign by recounting not only the landings at Helles of 25 April 1915, but also the subsequent bitter battles that followed in an attempt to capture the village and the vital high ground of Achi Baba. General Hunter-Weston’s weakened 29th Division achieved little during the first two bloody battles of Krithia, even when reinforced by the Anzacs, 42nd Division, Royal Naval Division and the French. The allies had little to show from their costly daylight frontal attacks, apart from a slightly firmer footing ashore and a growing casualty list. As the military situation looked to degenerate into a Western Front style stalemate, General Sir Ian Hamilton pushed for a final battle of Krithia. Using Hunter-Weston’s newly formed VIII Corps, and General Gouraud’s French Corps Expéditionnaire d’Orient, the Third Battle of Krithia launched on 6 June 1915. Despite a promising start, the attack soon collapsed against a stubborn Turkish defence, and although some lessons had been learnt from earlier failures; underestimation of the enemy was not one of them.

This is the true story, told using a rich mix of letters, diaries, photographs and maps, of Gallipoli's most costly battles. Gallipoli today is an exquisitely beautiful and tranquil place, with its turquoise waters, stretches of sandy beaches, wild flower covered meadows and pine forested heights, such a contrast to what occurred here over a hundred years ago.

The maps throughout the book, as we have come to expect in this series, are excellent. They include key overlays of the First Battle of Krithia Objectives, 28th April, alongside the Second and Third Battle of Krithia. Others include the Helles Evacuation... It isn’t a battlefield I have been to, nor no doubt so many who will read this book. But, there is no question that reading it will further inspire many to go.  This work will contribute to a greater understanding of the battlefield.

"I would be glad to carry this guide when I am next at Gallipoli and it is recommended. For visitors and all those with an interest in the Gallipoli campaign."

You'll want to slip this paperback into your pocket, or have the Kindle version on your phone if you go to Gallipoli. This is a well-written, well-referenced and well-researched little cracker which will serve both as a handy guide and a good overview of a miserable campaign which Britain and her allies finally walked, or rather slunk, away from in December 1915.

This book is packed full of little anecdotes and quotes and is very readable; the photos and maps alone justifying the cover price. As they used to say in a well-known British advert, don't leave home without it.

This is a book I wish I had read before my trip to Gallipoli in 2019. Stephen Chambers does a good job of explaining the confused sets of actions that took place around this small place. Whilst I struggled to keep up with the many highly detailed descriptions, I enjoyed the many illustrative eye witness testimonies he has included. They are thoughtful used to highlight the struggles both sides faced during the campaign and actions around Krithia.

The guided tours described in the latter part of the book would make a great break and I hope to follow several of them when I am able to return to the peninsula.

Well illustrated with a range of good photos, not just the standard ones you come to expect in any book on Gallipoli. The photos do help to structure of the book and are frequent enough to break up what could be unending blocks of text.

One I’ll be taking with me on my next trip.

A great addition to the series and yet another one to fill your backpack when heading off to this memorable part of the world.

This book like all the previous ones is written in a similar format in that we have the major events and battles in said campaign, then we have the major people involved achieving their awards followed by maps, charts and photographs and finally finishing with a number of walks that tour parts of the battlefields. I really like these books they are so informative and the stories and pictures are excellent and full of life and inspiration. My only disappointment is not being able to go out and visit these places but I think I will actually in the future because of these great books. These are great books and I would certainly recommend them to battlefield tour enthusiasts and those that just love reading their battle histories.

The battleground series of guidebooks generally follow a well-established and proven template. This latest addition to the Gallipoli series is a well written example of the format. Long standing Gallipoli Guide, and GBG Member, Steve Chambers has collated a comprehensive selection of maps, photographs and historical accounts and produced an excellent guidebook. If you intend to visit the battlefields of the Dardanelles, the six walks at the rear of the book will be exceptionally useful. Highly recommended.

For decades there can have been very few visitors to Gallipoli, in the days when foreign travel to more ‘exotic’ locations was the preserve of the wealthy, that is not now the case. For Australians and New Zealanders this is a pilgrimage. If you haven’t already been and are planning to visit, go with this book - and the others in the series- to maximise the experience.

The latest in a series of new battleground books the Krihia guide is packed with information, maps, pictures and anecdotal accounts needed to support the wandering tourist, or the visiting military battlefield student. It is certainly good value for money whatever your level of interest.

"This title is a valuable addition to the Gallipoli aficionado’s bookshelf and one to keep in your rucksack when walking the battlefield!"

For anyone planning a post Covid battlefield tour the book is an essential purchase. Handy pocket sized and with an excellent Advice To Tourers Section which is up to date and full of helpful information.

One particularly good section is the information on the French contribution to Gallipoli which is sometimes underplayed by British writers.