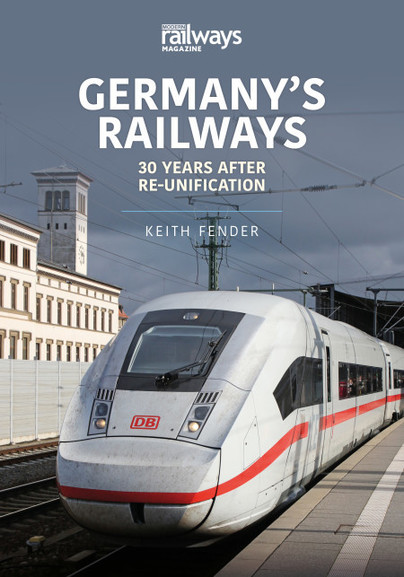 Add to Basket
Add to Wishlist
You'll be £11.99 closer to your next £10.00 credit when you purchase Germany's Railways. What's this?
+£4.50 UK Delivery or free UK delivery if order is over £35
(click here for international delivery rates)

Germany, divided after World War II into two separate countries, was re-unified on 3 October 1990. For the country’s rail system the complex task of unifying two networks with very different rolling stock and systems had just begun. New lines and stations were built to physically unite the network and new trains were introduced to transform services. Many rural regional lines closed as car ownership in the former East Germany increased dramatically. Amazingly, however, none of the former East German narrow-gauge lines that were still steam-operated in 1990 have shut; most still offer daily services whilst other long-closed narrow-gauge lines have been rebuilt and reopened by enthusiast groups.

This book, written by the Modern Railways magazine’s Europe Editor and illustrated with over 130 pictures, most of which have never been published before, traces the development of the unified German rail network and new national operator Deutsche Bahn (DB AG). It also looks at the wider rail industry in Germany and the introduction of market reforms leading to one of the most dynamic rail markets anywhere, with over 300 rail freight operators, open access intercity competition and more than 100 regional passenger concession contracts replacing the original two state railway companies. Looking to the future, the book examines plans for new high-speed lines and a national regular-interval timetable from 2030.