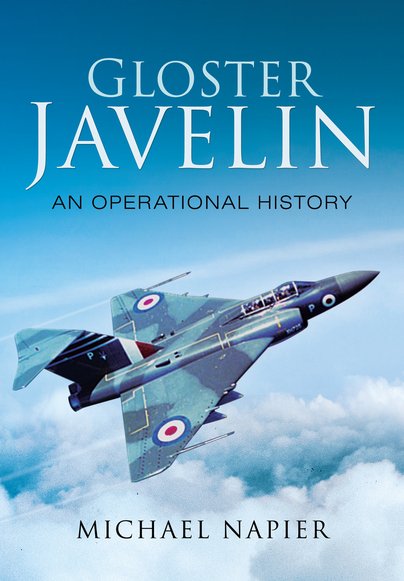 Add to Basket
Add to Wishlist
You'll be £25.00 closer to your next £10.00 credit when you purchase Gloster Javelin. What's this?
+£4.50 UK Delivery or free UK delivery if order is over £35
(click here for international delivery rates)

The RAF’s only delta-winged fighter – the Gloster Javelin was also Britain’s first true All-Weather Fighter. Based in the UK and in Germany, the RAF’s Javelin squadrons formed the front line of Britain’s air defences in the late 1950s and early 1960s. During this time Javelin crews pioneered the operational use of guided missiles and air-to-air refuelling by fighter aircraft. In the Far East, Javelins were involved in operations during the Indonesian Confrontation and the aircraft was also deployed to Zambia during the Rhodesian UDI Crisis.

In this history, which is richly illustrated with many previously unpublished photographs, Michael Napier blends official records with personal accounts to describe the operational history of this iconic jet fighter.

The Gloster Javelin was a much under-rated aircraft that has received less then its fair share of books. This book covers the Javelin's service career comprehensively and will probably long be the definitive account of a fighter that was significant and important to the RAF, if not for its direct service but as it role in preparing for the next generations. A must read for aviation enthusiasts.

Javelin modelers will benefit most from the hundreds of candid shots of the jet from all angles, with plenty of closeups harboring a wealth of details. The book is appended by color illustrations showing camouflage and squadron markings, we well as a list of all Javelins by serial number, type, unit, and dates, with remarks on several of the planes.

Decent works on the Gloster Javelin
are rather few and far between.
While not as glamorous as the
Lightning, or perhaps lacking the
romance of the early Meteor and
Hunter jets, the Javelin played a
hugely important role in the development
of the British interceptors
that followed.

Michael Napier’s
book is a superbly researched and
thorough piece that ranges from
the type’s introduction to squadron
service, all the way through to
the Malayan Emergency and
eventual retirement. His compilation
of photos, from all squadrons,
is amazing, and all chapters read
beautifully as the operational development
progresses from the
FAW 1 to the FAW 9.

The author doesn’t hold back
describing the difficulties in
keeping the aircraft serviceable,
or analysing some inexplicable
losses during its career. The operations-
intensive Berlin crisis
and the Malayan emergency are
especially interesting, as are the
various exercises and overseas
deployments that are, again, captured
in impressive detail. Anyone
especially interested in the
development of British interceptors,
or indeed any student of the
Cold War, should not be without
this book. A fascinating journey
through the service life of an incredible
aircraft

A most useful work, which comes recommended.

While it may have been somewhat overlooked, the Javelin was not an insignificant aeroplane and this attractive book goes a long way towards putting the record straight. I liked it.

This is a useful guide to the operational career of the Javelin.

The Gloucester Aircraft Company occupied the best part of a mile or so in Ermin Street, that ran all the way almost from the Cross Keys roundabout to the next village, Hucclecote. The factory and grounds were in Brockworth, just a half mile or even less from where I was born and lived for the first fifteen years of my life. My father and four of my uncles were employed there at various stages of my early life, and at ten o'clock every weekday morning, they tested the Gloster Javelin engines for a few minutes. Even a half mile away, it was deafening. They also used the wartime all-clear sirens to herald the end of shift. At various times, you might see a Javelin flying overhead in the skies above Brockworth. The Javelin was the RAF's only delta-winged fighter aircraft - I was proud to live in the village where it was developed and manufactured, and fascinated to read this superb account of its life and demise. Superb.

' Michael Napier's book is a wonderful and informative appraisal of this iconic aircraft, and a great reminder of an era not so long ago in Britain produced the finest jet aircraft in the world.'