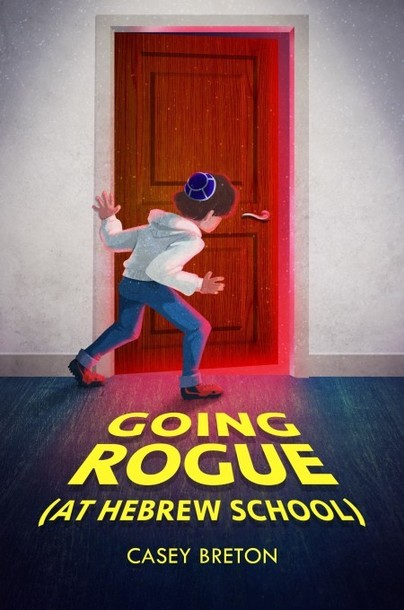 Add to Basket
Add to Wishlist
You'll be £12.99 closer to your next £10.00 credit when you purchase Going Rogue (At Hebrew School). What's this?
+£4.50 UK Delivery or free UK delivery if order is over £35
(click here for international delivery rates)

Ten-year-old Avery Green loves science. He loves football. He is crazy about Star Wars. But Hebrew school? No, thank you. Avery would rather have his arms sliced off with a lightsaber than sit through one more day of Hebrew School. He’s only asked about a million times why he has to go, but no one in his family has managed to convince him.

And then one day, Rabbi Bob shows up. He is strange, but how strange? And strange how? Piecing together some unusual clues, Avery begins to suspect that this new rabbi might be a Jedi master.

Armed with something more powerful than a lightsaber, he sets out to reveal the surprising truth.

Going Rogue (at Hebrew School) is a hilarious tale about the deep passions of a 10-year-old boy, Judaism, family, big questions and the surprising journey one can have in pursuit of truth and understanding. A book for any child who questions the purpose of religious school and any parent who has run out of answers.

I really enjoyed this book. Avery is such a curious, enthusiastic, and endearing character who keeps asking the question of many religious school attendees: but why do I have to be here? In true Jewish fashion, we don't really get one definitive answer, but rather a series of experiences that highlight the benefits of attending Hebrew school and the place those lessons can have in our lives outside of synagogue and the Jewish community.

I think this is the kind of story and the kind of characters that will have a broad appeal to kids and parents alike.

This book was such a great read! Unexpectedly poignant, Going Rogue at Hebrew School was funny, heartfelt, and a great introduction to the important philosophical questions of Judaism. I highly recommend this book!

Avery has a lot of interests - Star Wars (he's writing a script for an Ewok.), football, and he wants to be an astrophysicist.
Avery goes to Hebrew school, but he would rather play football with the local team, which meets on the same days as Hebrew school does.
His parents tell him it is a tradition for him to go to Hebrew school and maybe he'll meet some nice Jewish kids, Avery says he likes kids based on their character and not their religion.
Avery overhears and then checks out the football league's new practice time, which will not conflict with Hebrew school, he gets his parents permission and signs up for a team.
Along comes Rabbi Bob as a substitute teacher at Avery's Hebrew school, Bob likes Star Wars, football, and science, and he even comes to watch Avery and the other kids at football practice.
Avery becomes friends with Gideon, a boy who likes Star Wars as much as Avery does.
Then Rabbi Bob shares an amazing secret that Avery can't believe it's so cool!

This is a great book for a Hebrew School class to read. Everyone has questions at that age. This book helps answer them in a fun and engaging way, and I think every Hebrew School needs a copy of this book for a reluctant student. Avery is very relatable, and while this book might be best for people a little younger than him, it is still very good for what it is.

I really enjoyed this book and think it is a great option for 7-10 year olds. There are not a lot of books that focus on Jewish boys. There have been a few recent books that have Jewish girls as the main protagonist, but not boys. This solves that problem while easily appealing to boys and girls everywhere.

The story focuses on Avery Green. Like every kid I know, he doesn't like going to Hebrew School. He doesn't understand why it is necessary and would rather be playing football, doing some science experiment, or talking Star Wars. The story itself isn't about Hebrew school, it is merely an entry point and works regardless of your religious background. The story is about being a good person.

Avery struggles with the fact that while he loves football, he is a bit on the scrawny side and has overprotective parents who worry about concussions. Also, Hebrew school and football have always overlapped and Hebrew school comes first. But not this year. He manages to convince them to let him play and winds up on a team with two complete opposite characters who give us our yin and yang - Damon is the class bully and loudmouth and Gideon is introspective and very bright. Your typically bully vs nerd (I say this with love as a proud nerd). Damon is constantly making fun of Avery and Gideon. This drives Avery crazy, but Gideon is always kind and friendly.

In Hebrew school, Avery struggles with the reasons he is there and how Judaism matters in his life. Avery is the perfect kid who is constantly asking questions, but asking so many he drives his teachers crazy. A temporary rabbi who seems to totally get Avery makes the difference. He helps Avery see that asking questions is a big part of being Jewish. He also encourages Avery to look at G-d as The Force that lives within all of us and is ours to decide whether to use for good or evil.

But it isn't just Rabbi Bob that makes a difference to how Avery sees the world. Gideon is a force himself. He actually reminded me a lot of Owen Meany without the all caps talking. Gideon is the kid who is an easy target, but remains calm and cool at all times. When Damon is cruel, he remains kind considering that maybe Damon doesn't have friends to show him the right way to act. We learn that Damon's father is incredibly demanding and rather overbearing, that in fact, perhaps he doesn't see his son for who he is but rather only who he thinks he should be. Between Rabbi Bob and Gideon, Avery begins to see the world and his place in it differently.

The thing about this book is that it felt real. Avery was a kid I could easily recognize and dealing with struggles that I think many tweens are dealing with. They know they are supposed to be nice, but bullies are making it challenging. What their peers think of them becomes even more important than before and the idea of being with the "wrong" people weighs heavily on their minds. They are starting to question the world that they are in and no longer willing to just take an adult's word on something. Avery had just enough chutzpah to be a great protagonist and relevant to a lot of kids I know.

This book was really funny and imaginative and I loved the theme of friends. It was a light and fun read and I know that I enjoyed the book. There were a few other smaller themes that were just as important. This was a great read! This book is perfect for readers ages 8-11.

Avery loves Star Wars and football. Avery doesn’t love Hebrew school and doesn’t see why he needs to go twice a week. When the times of football practice change it means he can finally go to Hebrew school and get to practice or a match afterwards, so his parents agree to let him go. Gabriel, from Hebrew school also joins his team, but unfortunately, so does Damon, or Darth Damon as Avery likes to call him.

What follows is a lovely story about friendship and belonging. We are introduced to some colourful characters, namely Rabbi Bob and Gabriel’s grandfather, who help the youngsters answer questions about life, friendship, God and the universe.

I’m not a fan of Star Wars nor football and I’ll admit to not understanding some of the references, but I do understand friendship and being forced by your parents to do something even though you cannot see any point to it. I enjoyed Avery’s gradual realisation of what friendship is about and his acceptance of his Jewishness.

Everyone should be able to see themselves reflected in books and this story works on the level of any child trying to fit in at school or on a team but it also presents a picture of life as a Jewish boy in modern day America, which is not something I’ve come across before in a book aimed at this age group.

Sweet kids book that combines football, Star Wars, being a good person, and the importance of empathy all set in the environments of Hebrew School and Pee Wee Football. I really enjoyed this book, particularly the secondary characters, although I did think it was unlikely that a 10 year old would believe Jedi, the Sith, and lightsabers are real. I'd happily seek out more work bu this author

Avery is a 10 year old boy who doesn't quite understand why he has to go to Hebrew School. He would much rather be taking part in football training, doing science experiments or watching or talking about Star Wars. It's not like he has any friends at Hebrew School anyways. But when he inadvertently becomes more friendly with Gideon (a boy from Hebrew School who has just started his other school) he realises that maybe not everyone is what they seem and maybe there are 2 sides to every story. And with the help of Rabbi Bob, Avery starts to understand that Hebrew School and being Jewish is part of him.
This is a lovely tale of friendship and faith and Star Wars. Breton has done a fantastic job of tying Star Wars into Judaism and helping explain why people need to go to Hebrew School.

This is a delightful story of kindness and friendship. I love that the main characters are Jewish, the Jewish kids in my class will go wild for that. The relationships between men and boys are written beautifully in this book. Well worth a read!

This book was super cute! Who would have ever thought a book about Star Wars, Football, Hebrew school and a young curious Jewish boy would ever exist!! There were so many great life lessons in this short book that I just wanted to keep on learning! The relationship between the Rabbi and Avery was so amazing! He encouraged Avery to ask questions and to question what is written in the scriptures...it was so refreshing to see this perspective!
.
.
Why should we be kind to those that are mean? Is a common question that Avery asks throughout this book. Dealing with his own insecurities we saw such growth in Avery’s character! Now I can’t wait to ask my husband all sorts of questions about his time spent at Hebrew school!

Casey Breton is a former teacher and a recipient of the PJ Our Way Author Incentive Award. As a parent of three children, she has extensive experience answering the question, “Why do we have to go to Hebrew school?” She hopes this helps.  www.caseybreton.com