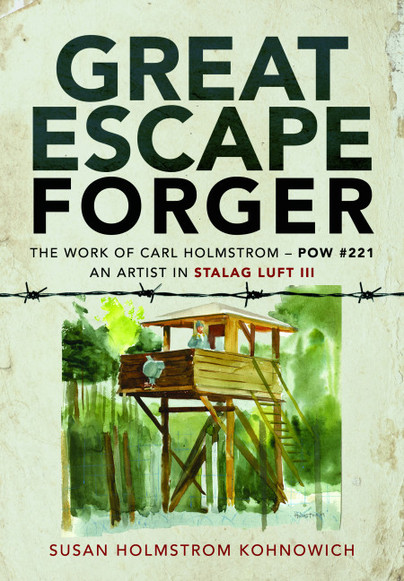 The Work of Carl Holmstrom – POW #221. An Artist in Stalag Luft III

Preorder
Add to Wishlist
You'll be £20.00 closer to your next £10.00 credit when you purchase Great Escape Forger. What's this?
+£4.50 UK Delivery or free UK delivery if order is over £35
(click here for international delivery rates)

As one of many artists confined in Stalag Luft III, Carl Holmstrom’s superb artwork depicts life as a Kriegie created with the perspective only a prisoner of war could draw upon as an eyewitness to history. He spent the majority of his captivity in that camp made famous by The Great Escape, later made into an award-winning film.

While a POW, he sketched his fellow prisoners and encouraged others to take up drawing as hobby, thus breaking the boredom of camp life. But his artistic ability proved to be even more important. Carl forged invaluable official German documents for escape purposes for other prisoners—work that was tedious and painstaking. Remarkably, he saved over 200 examples of his work by carrying them on the appallingly-arduous 1945 winter march through Germany when the camp was evacuated as the Russians closed in from the east

Post war, Carl Holmstrom said, ‘The drawings were made during imprisonment and represent a sincere effort to portray to the American people and especially to the relatives of the prisoners, intimate glimpses of Kriegie life.’ His words proved to be prophetic.

His daughter, Susan Holmstrom Kohnowich, spent five years working on an expansion of Carl’s earlier self-published Kriegie Life book. Extensive research went into the write-ups under the drawings and the biographies of the men in the portraits. This superb book honours Carl’s exceptional artistic gift. Indeed, it has strong claim to contain the finest collection of POW art to emerge from Nazi-occupied Europe.

Born in Branford, Connecticut, CARL HOLMSTROM received a full scholarship to Pratt Institute in New York City where he studied commercial art and majored in calligraphy. After graduation, he joined the USAAF as a B-17 bombardier but was captured when his plane crashed in Tunisia on his first mission in 1943.

After treatment for his injuries, he was imprisoned at Oflag 21B in Schubin, Poland, before being transferred to Stalag Luft III in Sagan, Germany, where he spent the next two and a half years. In January 1945, during the coldest winter in Germany in fifty years, he was marched fifty-two miles to Spremberg, Germany, to ride in a filthy, overcrowded box car to Stalag VIIA in Moosburg, Germany. His artwork made the entire arduous journey. He was liberated by American General George Patton’s Third Army.

Post-war, Carl became a free-lance commercial artist. He married and had four children. Carl died on 3 August 1979. Through his creations, so carefully safeguarded, the history of the lives of his fellow prisoners is preserved for posterity.