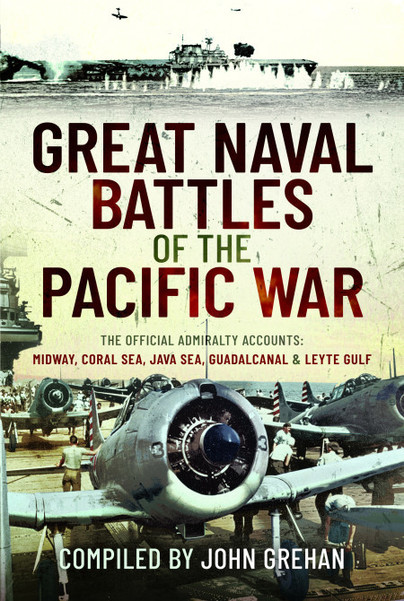 Add to Basket
Add to Wishlist
You'll be £17.50 closer to your next £10.00 credit when you purchase Great Naval Battles of the Pacific War. What's this?
+£4.50 UK Delivery or free UK delivery if order is over £35
(click here for international delivery rates)

The key naval battles against Imperial Japan in the Pacific during the Second World War have been described many times by numerous diligent and skilful historians. Such histories are, of course, the products of many years, even decades, of accumulated knowledge, but also of a received consensus of how the war played out to its, seemingly, inevitable conclusion. That of course is not how it was perceived at the time. Hindsight, as we know, gives us 20/20 vision. The accounts here, compiled for and on behalf of the Admiralty, were written either during or immediately after the end of the war before historians had begun to give their assessments of these momentous events.

These accounts were written for internal consumption, to guide and instruct naval officers. It was never intended that they would be released to the general public. As such, there was no jingoistic drum beating, no axes to grind, no new angles to try and find. The authors of these accounts relate each battle, move by move, as they unfolded, accurately and dispassionately.

This makes these accounts so invaluable. They read almost like a running commentary, as action follows action, minute follows minute. This sensation is magnified by the absolute impartiality of the authors, their sole attempt being to provide a thorough but very clear and comprehensible record so that others in the future could understand precisely how each battle was fought.

These accounts can never be superseded and never replaced. Written by naval officers of the time for naval officers of the future, they are the permanent record of the great victories, and the sobering defeat in the Java Sea, during the struggle for control of the Pacific which, for many months, hung precariously in the balance.

The big positive of this book is the quantity and quality of the information about the five major actions of the naval war in the Pacific.

The new breed of American fast aircraft carriers could make thirty-three knots, and each carried almost 100 strike aircraft. Brought together as Task Force 58, also known as the Fast Carrier Task Force, this awesome armada at times comprised more than 100 ships carrying more than 100,000 men afloat. By 1945, more than 1,000-combat aircraft, fighters, dive- and torpedo-bombers could be launched in under an hour. The fast carriers were a revolution in naval warfare – it was a time when naval power moved away from the big guns of the battleship to air power projected at sea. Battleships were eventually…