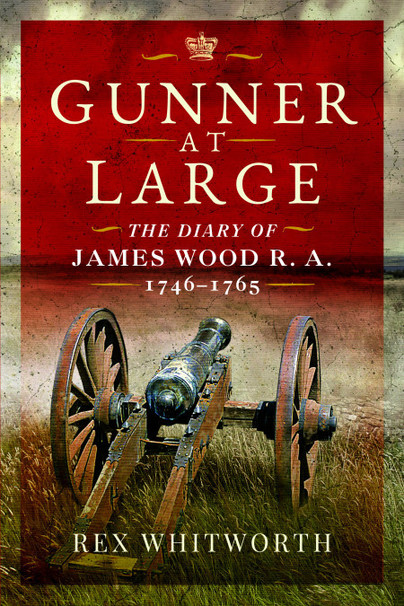 Preorder
Add to Wishlist
You'll be £11.99 closer to your next £10.00 credit when you purchase Gunner at Large. What's this?
+£4.50 UK Delivery or free UK delivery if order is over £35
(click here for international delivery rates)

Military histories have lately turned their attention to the British Army in the mid 18th century, when, but for the dedication of the House of Hanover, a professional standing army might never have developed in a country devoid of home frontiers. In 1716 the Royal Regiment of Artillery was founded. In 1741 Woolwich Academy became the first place of military learning in Britain and in 1744 a cadet company was established James Wood was one of the first cadets trained at Woolwich and served successfully as Volunteer, Mattross, Cadet, Cadet Gunner and Fireworker in France, the Low Counties, Scotland and for nearly 10 years in India between 1746–1765. His plain written factual diary described in a professional manner the day to day routine for a junior rank in the field train of the army.

During the formative years of the Regiment, professional efficiency markedly improved. Although Fortescue made this point strongly in his history of the British Army, little evidence is produced to sustain the judgement. In editing James Wood's diary, Rex Whitworth, from his knowledge of the period, has been able to place Wood's basic story in the contemporary military scene and so fill out the record of the professional British field gunner. This was a period when the army, in close co-operation with the Navy, fought the most successful war of our history on a worldwide canvas. The hazards of maritime operations in the days of sail are fully brought out by Wood, and he sheds new light on the earliest activities of the King's troops in India.

Any readers of Wood's fascinating diary with a modest knowledge of the times will fully agree with Dalrymple in his 'Military essay' of 1761 that “of all the various branches of our profession none hath made greater progress in it than the Royal Artillery”.

Gunner at Large will come as a surprise to all those who believe that between Marlborough and Wellington the British Army was but a contemptible corps of amateurs.

After taking a first-class degree in Modern History at Balliol, Rex Whitworth served in the Grenadier Guards during the war and left the army as a Major General in 1970. From 1970–1981 he was a Bursar and Fellow of Exeter College, Oxford. He was made a particular study of British Military History in the mod-eighteenth century. He has written a Life of Field-Marshal Earl Ligonier and a short history of the Grenadier Guards, as well as articles on Wolfe “Butcher” Cumberland and Amherst.

In his editing of this diary of James Wood, Rex Whitworth sheds new light on this much neglected period of the history of the Royal Regiment of Artillery.