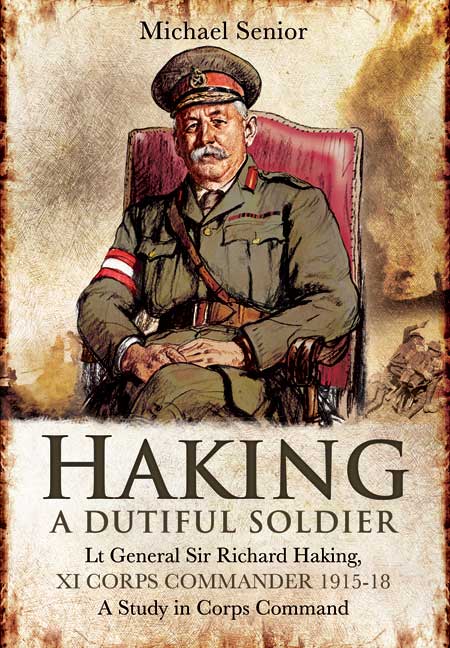 Add to Basket
Add to Wishlist
You'll be £25.00 closer to your next £10.00 credit when you purchase Haking: A Dutiful Soldier. What's this?
+£4.50 UK Delivery or free UK delivery if order is over £35
(click here for international delivery rates)

Sir Richard Haking was one of those generals of the First World War described as boneheads, bunglers and donkeys. And yet there was so much more to the man. In this study Michael Senior makes an in-depth analysis of Haking as the British XI Corps Commander and assesses objectively both his strengths and his weaknesses.

While Haking cannot escape a share of responsibility for the Fromelles disaster of 1916, this book adds a new dimension to the story of what went wrong and why. Such is the strength of the author's argument that the reader will want to revise the common perception of 'Butcher' Haking.

Michael Senior also examines Haking's role in the battle of Loos and his part in the downfall of Sir John French. In addition, this book throws light on a number of important topics connected with the conduct of the war including the role of a Corps Commander, trench warfare, the BEF 'learning curve', the Hundred Days, and the British involvement with the Portuguese and in Italy.

Since Haking did not leave any personal papers, the author has built this story from a range of archives, not only in the UK but also in Australia, Portugal and Germany. The result is a penetrating re-assessment of a much-maligned general.

“While this book might be at the more academic end of the spectrum, it is an important contribution to British First World War historiography which provides a refreshingly objective study around a much maligned general.”

This is a highly recommended book on a greatly traduced soldier.

The Great War only became known as `World War One' with the advent of WW2. Also known as the `war to end all wars,' there was barely 20 years of peace in Europe before hostilities had erupted again.

Significantly, up to 1914, generals had always sent their men to their deaths with scant regard for the consequences by keeping the numbers of casualties manageable. The trench and gas warfare of 1914-1918, however, changed all that. As this new breed of generals combined to send millions of men to their deaths, there came about a change in the psyche of the British working class - a lasting change in the way they looked upon the upper, ruling classes. No longer would the British male use such words as "M'Lord" or even "Sir." No longer would he doff his cap as a mark of respect, no longer would the ordinary police constable be so quick to "arrest that man" just because a well dressed person demanded he do so. Those changes to British society were brought about by a perception of those generals never seeing a shot fired - nor even getting their boots soiled by the mud upon which so many died.

After the war was over and the names of all those who died had been carved on the newly erected war memorials found in every town and village throughout the UK, the true cost was finally realised. Not were none of the generals amongst those names, they seemed to include very few officers at all. Little wonder those senior officers were openly derided as boneheads, bunglers and donkeys - so brilliantly portrayed so many years later by Stephen Fry in the final episode of Black Adder.

One such man who came in for particularly unenviable criticism was Lt. General Sir Richard Haking. Unfortunately Haking left no personal papers from which an historian might gain some insight into the problems, pressures and orders under which he was operating. It, therefore, says much for author and historian Michael Senior that he has produced this truly excellent work about the WW1 commander by consulting archives from the UK, Germany, Portugal and even as far away as Australia in order to re-evaluate public perception of this senior officer.

Commencing with some curious, and rather compelling, details about the infant Richard Hacking (later Haking), Michael Senior provides a full appraisal of how and why this man rose to become a Corps Commander in the very first chapter. Almost blow-by-blow, we are then treated to his role at the Battle of Loos, the attack on Fromelles, his time in Italy, Portuguese Expeditionary Force and his service in France to November 1918 by which time he had spent three years as a Corps Commander in a very bloody war.

All of which is then followed by the author's own assessment of Haking. Did he deserve to be described as a bonehead, bungler and donkey - or was he simply grouped together with others who deserved such epithets?

It is not for me to spoil any book by revealing the ending, so you will have to read it for yourself and make your own assessment. In so doing, I suspect not all will agree with the author.

Two things, however, are certain;, firstly, this book is a complete tour de force and, secondly, you will enjoy the read.