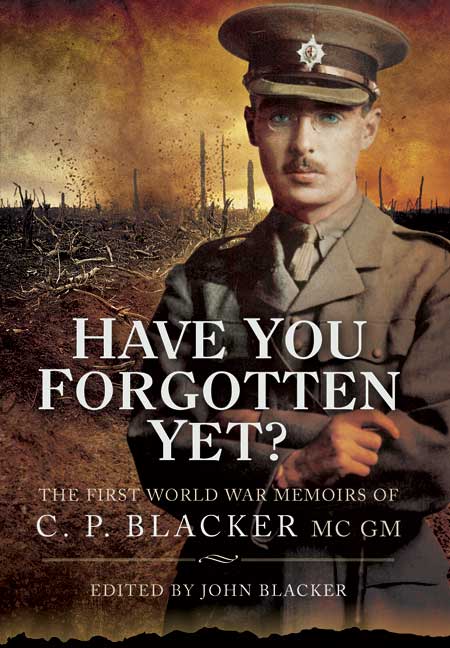 Have You Forgotten Yet? (Paperback)

Add to Basket
Add to Wishlist
You'll be £14.99 closer to your next £10.00 credit when you purchase Have You Forgotten Yet?. What's this?
+£4.50 UK Delivery or free UK delivery if order is over £35
(click here for international delivery rates)

The book tells the story of an infantry officer on the Western Front from 1915-1918. For the majority of this time the writer was in the Fourth Battalion of the Coldstream Guards, which had been designated as a "pioneer" battalion keeping open the lines of communications. As they were not called upon to 'go over the top', , their casualties were lighter than those of other battalions. This so preyed on the author's conscience he applied for, and was granted, a transfer to the Second Battalion. He was wounded in September 1918, and was hospitalised for three weeks. By the time he rejoined his battalion, the Germans were in full retreat, and the book ends with a moving description of the liberation of French towns which had been under German occupation for fours years.

The book differs from others of this genre by virtue of several features: the writer's introspective reflections on the traumatic events in which be was involved; his shrewd character sketches of his fellow officers; his strange mystical experience on the banks of the River Somme; the poignant juxtaposition of desolation wreaked by the war and his intense love of natural history, particularly birds and wild flowers. Above all he believed that the whole war was a hideous mistake.

This is a detailed memoir and on a personal note I found it very useful in terms of Pioneer troops’ work for some research that I have been doing.

Well worth reading on many levels, if you are interested in the Guards, the Pioneers, officers’ stories or Great War memoirs in general then it’s for you. I enjoyed reading it and have been glad to review it and it is good to see the old book given a new lease of life. It’s something different, an interesting war book written by an interesting man. Give it a go.

This books differs in many ways from other officers' memoirs as the author spends much time in introspection and reflection on the traumatic events in which he was involved. This is quite a remarkable book and not at all what one would expect with a substantial Great War memoir. It is extremely well written and engaging, and leaves the reader himself in a very reflective, thoughtful mood.

It is an extremely sensitively written book and represents one man's plea for future generations to learn from the mistakes of the past. Both informative and very moving.