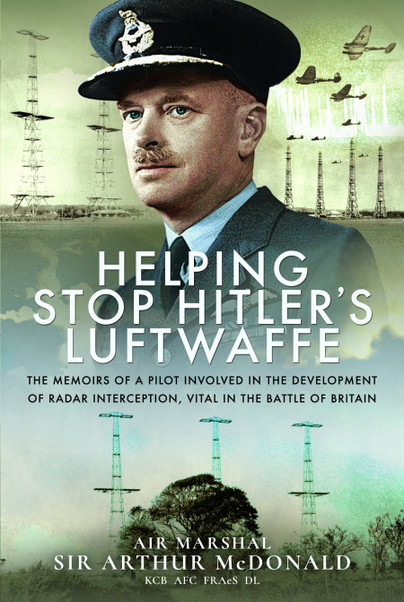 The Memoirs of a Pilot Involved in the Development of Radar Interception, Vital in the Battle of Britain

Add to Basket
Add to Wishlist
You'll be £20.00 closer to your next £10.00 credit when you purchase Helping Stop Hitler's Luftwaffe. What's this?
+£4.50 UK Delivery or free UK delivery if order is over £40
(click here for international delivery rates)

‘The bomber will always get through’ was the oft-repeated mantra, first coined by Stanley Baldwin in 1932, which emphasised that the only realistic form of defence was offence. This belief determined the UK’s military strategy, with more attention, and resources, being devoted to bomber production rather than fighters. With bombers able to fly at hundreds of miles an hour, by the time the incoming aircraft had been detected, it would be too late to scramble fighters to intercept them. That was until Sir Henry Tizard and his colleagues first demonstrated that radar (or Radio Direction Finding as it was then called), could detect an aircraft approaching Britain at a considerable distance, allowing fighters to take to the air before the intruders reached British soil.

This was shown in the ‘Biggin Hill Experiment’ when a young Arthur McDonald led three biplanes from RAF Biggin Hill, and which were directed by radar sets on the ground to intercept incoming aircraft. At the time McDonald was told, ‘that the whole future of this country depends on the results which you obtain’. McDonald succeeded and, having demonstrated that bombers could be stopped, Britain turned its attention to building fast, modern fighters, and to developing a radar network – just in time for the Battle of Britain. For this work McDonald received the Air Force Cross.

In this enlightening, and light-hearted autobiography, Air Marshal Sir Arthur McDonald, as he was to become describes those early radar experiments – the first non-cooperative interception was an unsuspecting Dutch airliner! – and of another of his achievements, the Duxford flare path. This lighting system was so cleverly designed as to be visible to landing aircraft but not to enemy attackers.

In his subsequent career, McDonald became Air Defence Commander in Ceylon in 1942, Air Officer Training at Headquarters Air Command of South East Asia Command in 1943 and Air Officer Commanding No.106 Group in April 1945. He was the last commanding officer of the Royal Pakistan Air Force and held many senior posts in the RAF until his retirement in 1962. But it his part in the development of Britain’s air defence at the most crucial time in its history, for which he will always be remembered.

An extraordinary man who paved the way for success against the German bombing raids and gave Britain the breathing space it needed to develop the superior fighter aircraft with which the Battle of Britain was won.

This is a fascinating book that captures the spirit of the Royal Air Force from the amateurish days in the 1920s through to the 1960 when the RAF was one of the most potent fighting forces in the World. Sir Arthur made an enormous contribution to the RAF in this period. His contribution to the development of ground to air control at a crucial period in Britain’s history being particularly worthy of note and anyone looking for an insight into RAF life in those days need look no further.

Born in June 1903, as a boy Air Marshal Sir ARTHUR McDONALD KCB, AFC, FRAeS, DL grew up in Antigua, his engineering career beginning in the Antigua Sugar Factory, earning him wages of just £1 a week. He joined the RAF in 1924, remaining in the service until his retirement in 1961. Besides a distinguished RAF career, Sir Arthur was a keen sailor and there are informative accounts of his sailing exploits; including yacht racing in Singapore in the 1930s, winning the Burton Cup in 1937 and being the oldest competitor in single handed sailing in the 1948 Olympic Games in Torbay.