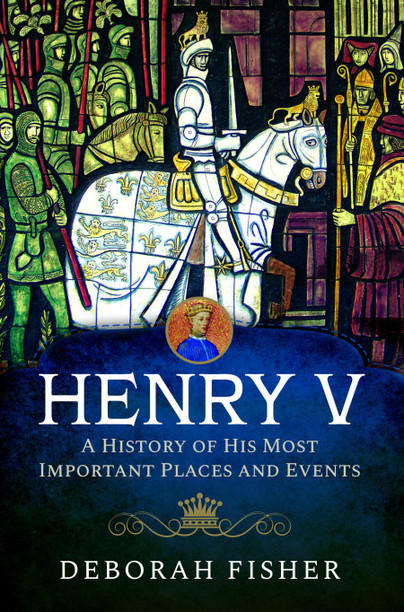 A History of His Most Important Places and Events

Preorder
Add to Wishlist
You'll be £16.00 closer to your next £10.00 credit when you purchase Henry V. What's this?
+£4.50 UK Delivery or free UK delivery if order is over £40
(click here for international delivery rates)

There are many books about King Henry V, several of which concentrate entirely on his victory at the Battle of Agincourt in 1415. This one looks at his life from a different point of view, concentrating on places that were important in his life and can still be visited by those interested in getting a better feel for the man and understanding how his character was shaped by his environment.

Henry spent much of his youth on military campaigns in Ireland, Wales and the Marches. As Prince of Wales, he became battle-hardened as a teenager when he received a near-fatal wound at Shrewsbury. Despite a fraught relationship with his father, he quickly reinvented himself as a model king, and set his eyes firmly on the crown of France. Thereafter, much of his nine-year reign was spent on military campaigns beyond the British Isles.

The book takes its reader on a journey from the rural areas around Monmouth, where he was born, to Harlech Castle, where he put an end to Owain Glynd&#373;r's rebellion, and from his coronation at Westminster Abbey to his private retreat at Kenilworth. We see him seize Harfleur and take the long road to Calais, culminating in the Battle of Agincourt, one of the most spectacular victories ever won by an English army. We follow his continued campaigns in France, through his marriage to Catherine of Valois at Troyes, to his eventual, tragically premature, death at Vincennes.

Deborah Fisher is a retired librarian and IT practitioner who now lives in the Vale of Glamorgan and concentrates on historical and literary research. Her past publications include Who’s Who in Welsh History (1997), Princesses of Wales (2005), Princes of Wales (2006), Royal Wales (2010) and Siegfried Sassoon at the Grave of Henry Vaughan (2015). She is the Chair of the Barbara Pym Society, based at St Hilda's College, Oxford, where Deborah and Barbara Pym both studied.

On St Crispin's Day, 25 October 1415, Henry V's small English force routed the French in the most famous clash of the Hundred Years' War. On a battlefield east of the tiny village of Agincourt in northern France, the English king's heavily outnumbered army repelled the massed attacks of the enemy and killed or captured leading members of the French nobility. The encounter changed the course of the war and its impact on English history endures to this day. In this important new study, military historian and battle psychologist Michael K. Jones puts Henry V's inspirational generalship at the heart…

Click here to buy both titles for £28.99
Other titles in Pen & Sword History...
eBook