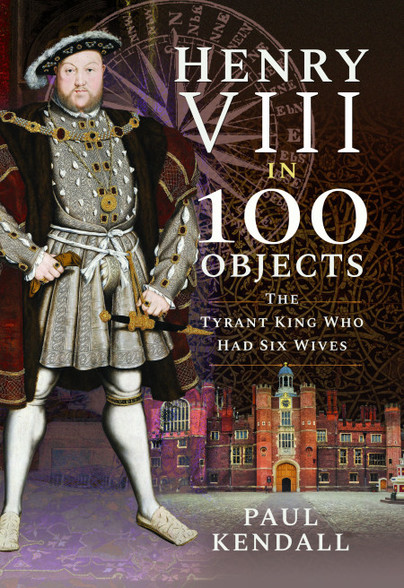 The Tyrant King Who Had Six Wives

Add to Basket
Add to Wishlist
You'll be £30.00 closer to your next £10.00 credit when you purchase Henry VIII in 100 Objects. What's this?
+£4.50 UK Delivery or free UK delivery if order is over £35
(click here for international delivery rates)

Henry VIII is one of history’s most memorable monarchs. Popularly known for his six wives, and the unfortunate fate which befell Anne Boleyn and Catherine Howard, Henry initiated many reforms and changes which still affect our lives today.

The annulment of his marriage to Catherine of Aragon set in motion the separation of the English church from Rome and the establishment of the Church of England, which in turn led to the dissolution of the monasteries, the hauntingly evocative remains of which can be seen across the United Kingdom. Henry also oversaw the legal union between England and Wales, and he is also known as ‘the father of the Royal Navy’, with one of his great warships, the Mary Rose, lost in 1545 and recovered in 1982, becoming one of the most famous wrecks in maritime history.

In addition to the monasteries, other buildings around the UK continue to remind us of the times of the Tudors – there is the site of Greenwich Palace at the Royal Naval College Greenwich, where Henry was born; his great palace at Hampton Court; Lambeth Palace where Thomas More refused to sign the oath to make Henry the Head of the Church, and the Bell Tower in the Tower of London where More was imprisoned before he was beheaded.

Henry’s breach with the Pope led to the threat of war with Catholic France and Spain, which prompted Henry to construct a series of powerful forts around the English and Welsh coasts. These elegant and symmetrical defensive structures are still awe-inspiring.

In this engaging and hugely informative book, the author takes us on a journey across the country, from Deal Castle on the south coast, to Tower Green where Anne Boleyn and Catherine Howard lost their heads, and far north to Rievaulx Abbey in Yorkshire. Along the way we see places where Henry stayed, where the Mary Rose was recovered, the homes of his consorts and Smithfield where prominent individuals convicted of heresy were burned at the stake. Travel, then, not just across the country, but also back in time through 100 objects from the days of the second Tudor monarch – Henry VIII.

I think this is a great book for lovers of history, and do recommend giving this a go.

Beautifully and profusely illustrated throughout, "Henry VIII in 100 Objects: The Tyrant King Who Had Six Wives" is an extraordinarily informative and inherently fascinating introduction to the life and times of Henry VIII.

This book is another fantastic choice to better understand Henry VIII's personality. Although not having the depth of a biography, the text manages to make the reader retrace the footsteps of this great and terrible monarch.

All in all, this is really well-written and illustrated book about the people, places and objects that would have been familiar to Henry VIII. A great addition to any bookshelf.

This is a nice addition to the bookshelf of a Tudor enthusiast. Paul Kendall shows us Henry VIII through 100 objects linked to this infamous king. What can you expect to see inside? The book starts with memorial commemorating Henry VIII's birth where the Greenwich Palace once stood. The "objects" from this book are palaces and royal residences (Eltham, Tower, Hampton Court), tombs, abbeys, portraits, armours, letters and many others.

This is an original way of telling Henry's story and I loved every page. Good job!

The 100 objects series continues with Henry VIII, probably the most famous monarch in English history. Superb.

This book looks at 100 objects connected with Henry VIII, one of the most well-known monarchs during his eventful life and six wives. Henry VIII’s life consisted of leaving the Rome and the commencement of the Church of England, known as the father of the Royal Navy, he was responsible for the making of the Mary Rose, possible war with both France and Spain, building a number of castles and fort throughout England and Wales. This is all before we even start talking about his marriages to six women, Catherine of Aragon, Anne Boleyn, Jane Seymour, Anne of Cleves, Catherine Howard and Catherine Parr.

A large and glossy type book full of excellent and pristine photographs of many items and places that shaped the life of one of England’s most fascinating kings. What makes the book great is that you have 100 objects, from former homes, items of war, execution sites, portraits, clothing, jewellery etc but it’s the added story and information surrounding information that help tell the story of Henry VIII and all the people in his life. I’ve read a few of these books from this series, U-Boats at War, Home Front in WW2, the First Blitz & the Third Reich they are all high quality books with excellent objects/photographs. They are like the ideal ‘coffee table’ books, and with that you have them written by top class author who really know their field. A highly recommended book and if you thought you knew everything about Henry VIII, you haven’t read this book.

Lavishly illustrated, with around 200 colour photographs, it's the sort of book you would be happy to leave on a coffee table for guests to glance through – and if you have any interest at all in history, you'll enjoy dipping into it yourself.