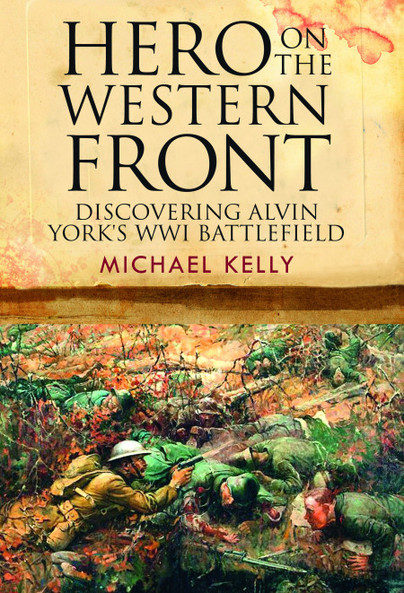 Hero on the Western Front (Hardback)

Add to Basket
Add to Wishlist
You'll be £25.00 closer to your next £10.00 credit when you purchase Hero on the Western Front. What's this?
+£4.50 UK Delivery or free UK delivery if order is over £35
(click here for international delivery rates)

They knew it was the end. Weakened by four years of war, the reality had finally dawned on the Germans that their armies could never stop the combined might of the Allied forces, now bolstered by the fresh, enthusiastic Americans, who were now determined to be involved in the conflict that had engulfed the world.

The US effort in 1918, in what became known as the Hundred Days Offensive, was focused on the Argonne Forest. It was there that 1,200,000 men were deployed in what was to be the largest offensive in the United States’ military history.

It was in the fighting in the Argonne Forest that one of the most remarkable incidents in the entire First World War took place. In October 1918, Corporal Alvin Cullum York single-handedly captured 132 Germans and killed twenty-one in a desperate fire-fight.

York’s battalion of the 328th Infantry Regiment had become pinned down by heavy machine-gun and artillery fire. Its commander sent Sergeant Bernard Early, four non-commissioned officers, including the recently promoted Corporal York, and thirteen privates to infiltrate the German positions and neutralise the machine-guns.

The small American force came upon a large group of enemy troops having breakfast, and these were taken prisoner. They then came under fire from German machine-guns which left eight men were killed or wounded and York as the senior NCO. York and the survivors returned fire and silenced the enemy, allowing the Americans to rejoin their battalion with the 132 prisoners in tow.

York was promoted to Sergeant and he received the Congressional Medal of Honor.

The site of this famous action was believed to have been identified in 2009 and a memorial erected by the French authorities. However, a team of archaeologists, with help from the French Department of Archaeology and the use of modern day Geographic Information Science, believe that the memorial is incorrectly situated, and have uncovered thousands of exhibits to support their claim.

Complete with detailed plans and diagrams, and a rich variety of photographs of locations and artefacts, Michael Kelly presents not only a fascinating account of York’s determined courage, but also a detective story as the team unravels the evidence to reveal the exact ravine where the most famous US military action of the First World War took place.

For the student of military history, this book offers an excellent case study in understanding the utility of first hand accounts, official records and archaeology as a means of establishing historical facts. Aside from correcting inaccuracies in previous research this book also serves to validate the extent of Sergeant Alvin York’s achievement – thus definitively securing his place in the ‘Pantheon of American Heroes’.

Complete with detailed plans and diagrams, and a rich variety of photographs of locations and artefacts, Michael Kelly presents not only a fascinating account of York's determined courage, but also a detective story as the team unravels the evidence to reveal the exact ravine where the most famous US military action of the First World War took place.

Sometimes, the germ of an idea formulated over a beer can have profound consequences. Such an idea was the true location of the fight in which Sergeant York was involved that led to his award of the US Congressional Medal of Honour really occurred.

If there was one thing really important in the recording of military history it is getting the facts right from the available evidence. The recording of history is quite properly a process of revision, especially if advances in technology and other determinants dictate that secondary recordings made after the primary event are later suspected or found to be inaccurate.

This book presents the story of how a group of enthusiastic people supported battlefield investigator and historian, Michael Kelly, in his efforts to determine, beyond doubt, where the York fight really took place. Several efforts had been made after 1919 to place on record the detail of what happened and where it happened, additional to the routine ward records of the involved units on both sides. Over time, more records were located through research rigour, and technological advances allowed more discriminating physical enquiry of the battlefield itself to occur.

Recently, a US-led group carried out an investigation that resulted in a claim of 100% accuracy in determining where the York fight occurred. This is a challenging claim, not consistent with normal scientific enquiry and rigour. It is a bold claim indeed, and one might well ask why such a claim needed to be made. National pride and sentiment can sometimes cloud judgement, an unfortunate influence on otherwise laudable intent.

However, another group, based on the author Michael Kelly, has been able to definitively disprove the US version and in its place, demonstrate the true location. Using sophisticated and accepted scientific enquiry method, official translations of German records, wider sourcing and GIS technology, this wider international research group also included archaeological experts who present compelling evidence. The real location of the York fight is revealed along with masses of visual and technical evidence to support the new finding. In proper research terms, this is a study capable of independent and repeatable scientific testing for validity.

The readers will form their own opinion of which version is right because, in my view as an Australian military historian and qualified researcher, they will take clear cognisance of the superior process of scientific enquiry presented by what Kelly modestly terms The Nolan Group.  The Nolan Group team, including author Michael Kelly, are to be applauded for presenting this necessary revision to the record. The world now knows, in my opinion, where Sergeant York and his men really fought on that extraordinary day.

I was watching a PBS show about Alvin York and the fight in which he won the Medal of Honor. During the show the book was mentioned and the author provided a tour of the battlefield. I thought what the heck, it kinda looks interesting and I need a new read. That was one of the best decisions about a book that I have made in months. I highly recommend this book to anyone interested in Alvin York or WWI of battlefield archeology.

Reading Michael Kelly's book, you can follow the trail of the scientifically recorded artifact discoveries meticulously mapped and detailed. You can see for yourself the source materials and interpretations. As is unfortunately true with most WWI army records, there were mistakes made in army records. The author does a great job when explaining which may be contemporaneous mistakes (like coordinates for graves) and which are facts. He clearly explains the rationale for making that determination. After clearly laying out facts, the rational conclusion is that the Nolan Group's proposed York battlefield site is most probable.

★★★★★ I highly recommend Michael Kelly's book, which I have eagerly awaited since pre-ordering back in March. It has exceeded my expectations...

impressively thorough and well-documented. Chapter organization is outstanding. Information is presented clearly and concisely. The many maps and color photos are exceedingly well-chosen. Very readable style and I even find the publisher's choice of font to be very pleasing. I highly recommend Hero on the Western Front to any reader interested in Sgt. York. My suggestion is to read this book, as well as the 2014 title. and decide for yourself. In my judgment, the reader will see the superior strength of the arguments for the Nolan site, compared with those for the official "Circuit du Sgt. York." The evidence will speak for itself. If you are planning to travel to France to visit the location, please read Michael Kelly's Hero on the Western Front, which I am very happy to see finally published.

Click here to listen to interview (1st of 2 parts)