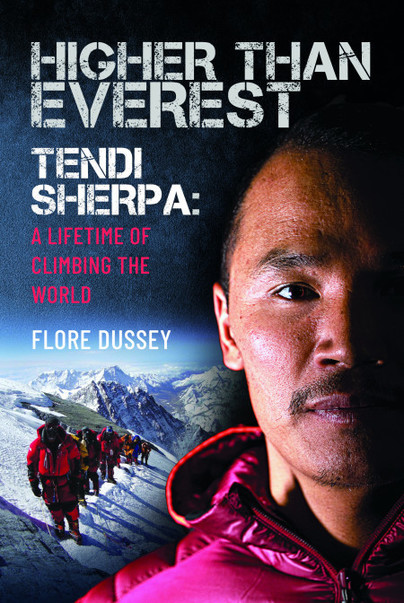 Tendi Sherpa: A Lifetime of Climbing the World

Preorder
Add to Wishlist
You'll be £20.00 closer to your next £10.00 credit when you purchase Higher than Everest. What's this?
+£4.50 UK Delivery or free UK delivery if order is over £40
(click here for international delivery rates)

Higher than Everest paints an uncompromising portrait of Tendi Sherpa, who has successfully climbed twenty-one mountains over 8,000m, including fourteen ascents of Everest. This young father, part of the elite group of Nepalese guides, embodies the new generation of Sherpas who are taking their destiny into their own hands. In the numerous conferences he holds throughout the world, he never hesitates to denounce the amateurism and obsession of certain people determined to climb Everest, as well as the over-crowding of the sacred Himalayan mountains.

As a child, the man who would go on to save many lives on the Roof of the World once dreamed of becoming a monk, and from his years at the monastery, he still retains a deep attachment to Buddhism and its many rituals. Resolutely looking towards the future, but also concerned about respecting the environment and traditions, Tendi regularly returns to the secluded valley of Khembalung, the land of his ancestors, never forgetting where it is he has come from.

Flore Dussey is a journalist at Radio Télévision Suisse (RTS). As a senior journalist, she spent the first half of her career covering international news, and since 2010  has covered local news for the Valais region.

Her love of reporting led her to make several independent documentaries, including The Power of Citizen Leadership, which won the Hollywood International Independent Documentary Award in December 2016.

Her father passed on to her his love of Nepal, which she first discovered during a trek to Rolwaling Himal in 2003.