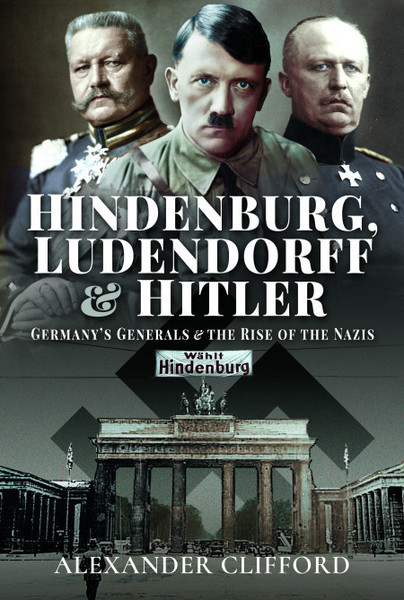 Add to Basket
Add to Wishlist
You'll be £25.00 closer to your next £10.00 credit when you purchase Hindenburg, Ludendorff and Hitler. What's this?
+£4.50 UK Delivery or free UK delivery if order is over £40
(click here for international delivery rates)

There are some books that come along that you just want to dive into and this was one of them. I’ve long been learning about the First World War & the Second World War but often some of the most fascinating places in history is the ‘in between’ wars section and this particular part of history is fascinating as Alexander Clifford explores a part of that history, Hindenburg, Ludendorff & Hitler. The period of the Weimar Republic was basically 10 wasted years where life in Germany just festered and all the surrounding upheaval was no surprise that a mangled relationship between these three men would sow the seeds for another global conflict.

Although in my opinion, Hitler has to carry the can for this relationship and what would eventually happen, it was very much interesting reading about the relationship, conflict and suspicion between these three, it really does enlighten the reader as to how things went wrong and in a way shows clearly who was the aggressor, the yes man and the fooled in this bad political relationship. This has been a fascinating read, comprehensive, detailed and very well written and with all the other characters in the book would in other world’s make a really good thriller. From beginning to end this was a really good book, I would have no other choice but to recommend this book and if you want to learn about the relationship between these three men, this is one of the best books I have read on this subject.

This is a book that will intrigue and interest many, from those who have an interest in the key German Generals from the Great War, Hindenburg and Ludendorff, alongside the continued fascination for so many with the early days of instability of the Weimar Republic. At the same time, it will interest anyone who seeks to learn more about that movement of Adolf Hitler at this time.  It provides a German history as much as a military one and a tale of German political history.

Until I read this book, I had no idea how precarious the political situation was in Germany. After reading about the conditions in the 20s and 30s, it is more understandable how Hitler rose to power. This book definitely filled a gap in my knowledge of WWII era history.

A well-considered book that had me stopping and thinking every few pages and researching on the internet; I’m going to run to 4.5 anchors. This book really added to my awareness of the events that led to Hitler and the Nazis’ rise to power, but has left me with plenty more questions.

Germany's Generals and the Rise of the Nazis is no mere political history; it is above all a
human history, narrated by an author with an eye for an illuminating anecdote. Drawing on his
capacious knowledge of the Weimar political scene, Clifford deftly marshals a rich, and
occasionally startling, array of source material to produce a compelling reappraisal of the
under-appreciated role of the military in the disintegration of Germany's first democracy that
rises above purely events-based accounts in its keenly observed psychological portrayals of the
megalomaniacal men behind their martial masks.

A very concise and well researched book on the three leading figures during world war 1 at Germany's after effects of their parts in the war looking at how their personality and skills were put to use for better or worse. A very compelling read.

Whilst many people have an outline of how Hitler gained power, the real story sits in the failure of Weimar politics and the central role of Hindenburg in conducting events. The author has delivered an excellent narrative of the events from 1918 to 1933 and the story is detailed and explains how Ludendorff and Hindenburg played their very different parts. It is not another ‘Hitler’ book and it is right that the two generals dominate the story. In the end of course global economic collapse provides the route to dictatorship and the problems that follow. Given the inability of the Weimar system to deal with its moribund inertia it is not surprising that voters sought relief in extreme solutions.

I was leading a group in Munich studying German history in the Weimar period; it was the day after Lehman Bros collapsed and it seemed that the global economic system would also collapse. All of the participants agreed that if an apparent ‘saviour’ emerged promising to restore their incomes, assets and jobs they would likely support him. Plus ca change?