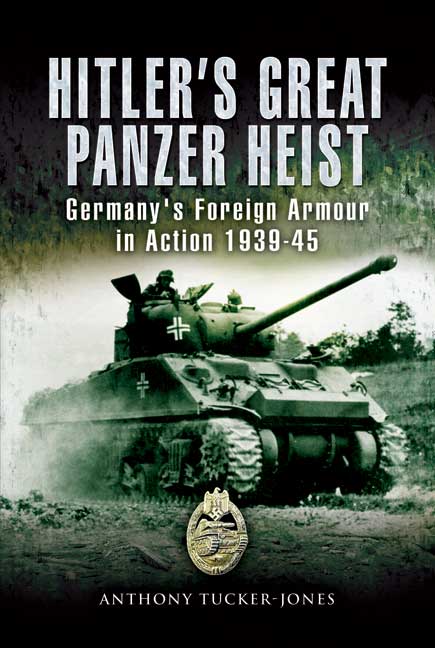 Add to Basket
Add to Wishlist
You'll be £19.99 closer to your next £10.00 credit when you purchase Hitler's Great Panzer Heist. What's this?
+£4.50 UK Delivery or free UK delivery if order is over £35
(click here for international delivery rates)

The prowess of the German panzers is the stuff of legend, but it is not generally known that Hitler stole over 10,000 British, Czech, French, Italian, Polish and Soviet tanks and other armoured fighting vehicles to feed his war machine. He also gained another 6,000 through various alliances. At the height of his extraordinary military success over 25 per cent of the German tank fleet was of foreign origin. The triumph of the blitzkrieg of 1939-41 was partly attributable to the great panzer heist he carried out across the continent of Europe. In this fascinating and meticulously researched investigation Anthony Tucker-Jones tells this hitherto unrecorded story. He traces the development of Germany's foreign armour before and during the war and describes how captured fighting vehicles - tanks, self-propelled guns, assault guns, armoured cars and personnel carriers - were reused by the German army throughout the conflict.

Anthony Tucker-Jones sheds light on the German exploitation of foreign armoured vehicles from as early as the German Anschluss with Austria in March 1938 to the very end of the conflict in May 1945. This sound approach gives the reader a chance to understand ever-changing priorities of the German Army over the course of the war.

This is a fascinating book and opened my eyes to the scale of the victory Hitler gained when he occupied Czechoslovakia. ... very well researched ... and sheds light on an overlooked aspect of history

From Rommel using British Matilda tanks in North Africa to a face off of Soviet T-34s on opposite sides of the battlefield, this book details the numbers and events in meticulous detail. ... Hitler's Great Panzer Heist not only includes detailed figures, but also interjects many quotes and stories from people who were there and were able to recount what part this mostly unknown story played during World War II. I found this to be very interesting reading.